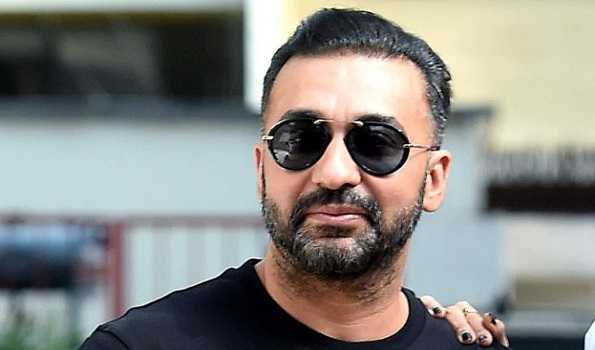 Wednesday, 28 July 2021 (14:58 IST)
Mumbai: A local court here on Wednesday rejected the bail pleas of actor Shilpa Shetty's husband and businessman Raj Kundra along with his associate Ryan Thorpe in the pornography racket case.Both of them are presently languishing in jail.
They were remanded into judicial custody for 14 days by a local court on Tuesday.
A fresh FIR has been registered here by Mumbai crime branch in connection with a Erotica case naming businessman Raj Kundra and actress Gehana Vashishth in a new case, official said on Wednesday.
The case was registered by the crime branch's property cell at Malwani police station on Tuesday after an actress approached the police and alleged she was forced to shoot for a pornographic film for the HotShots app.

Kundra – husband of actress Shilpa Shetty - was produced before the court as the police moved a remand application seeking extension of custody on the grounds that investigation is going on.

The court was informed that the police had come across an amount of Rs 1.13 crore belonging to Kundra’s company in a private bank account, which they wanted to probe further.

He said that there was nothing new for which the prosecution sought to extend his custody and reiterated that if the police had summoned Kundra he would have cooperated.

Hearing both the sides, the court rejected prosecution plea for extension in police custody and remanded him into judicial custody.

Meanwhile, Kundra has applied for bail and his application will be taken up for hearing on Wednesday before the Chief Metropolitan Magistrate’s Court.

Kundra was arrested by police on July 19 in the sensational case of producing and distributing pornographic content through mobile applications.

The police have also raided Kundra’s home in Juhu last Friday and recorded the statement of his wife Shilpa Shetty, besides summoning others, in the pornography case that first erupted in February and later international angles came to the fore.

The Mumbai Police have appealed to other victims to come forward and give information about the illegal acts committed against them and said they have already recorded statements of two aggrieved women.

Kundra has been charged with offences under various provisions of Indian Penal Code, IT Act and Indecent Representation of Women (Prohibition) Act. (UNI)

IND vs NZ: Poonam Pandey raises WTC Final fever, says, ‘Should I again say I will strip if India wins?’