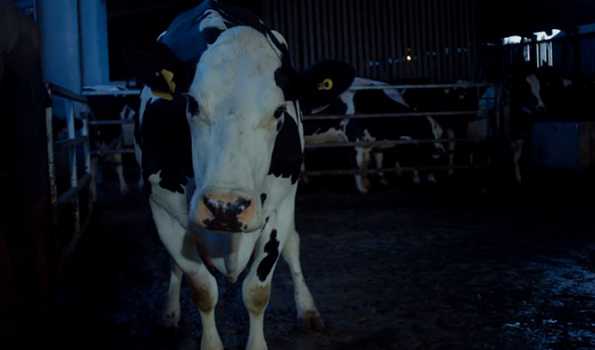 Sunday, 11 July 2021 (13:28 IST)
New Delhi: As the world is focused on saving human lives from a disastrous pandemic, an endearing portrait of the daily life of a cow and her service to the people has won hearts at the ongoing Cannes film festival.

One of the surprising entries at the Cannes film festival this year is a documentary, 'Cow', directed by English filmmaker Andrea Arnold. Part of the newly-introduced Cannes Premiere section of the festival, which began on July 6, the 94-minute film by Arnold, who is known for directing season two of the hugely popular television series, 'Big Little Lies', has stood out for its modesty and candid storytelling.

The film, which has been in the making for eight years, wowed the Cannes audience for its honesty in underlining the connection between nature and society, a fact made even more relevant during the pandemic. The film crew followed two cows for four years to make the movie, which is a tribute to nature.

"We all grow up with quite romanticised versions of nature. We have story books and fantastic paintings of the lovely nature. But I started to wonder, what is the reality. It is the disconnection from the reality that we are all facing now," says Arnold, who is also the head of the jury for Un Certain Regard section of the Cannes festival this year.

British producer Kat Mansoor says Arnold came to her eight years ago with a simple pitch, saying: "I would like to tell the story of a cow."

"She said I would like people to just know her (cow)," recalls Mansoor, a two-decade documentary veteran, who immediately agreed to produce the film.

"We had two cows, in case one of them died during the shooting," says Mansoor. In fact, one of them died during filming leading to the production team choosing Luma, whose life is portrayed in the film. The production team also found the right farm for the filming after driving around cow fields for hours. It took the team six months to finally decide on the farm where the filming was held.

"It is not your average project," says Mansoor, who produced the 2008 documentary 'Here's Johnny', on the life of legendary British comic book artist Johnny Hicklenton, renowned for his depictions of 'Judge Dredd'. The film follows various processes within the life of a cow. "Andrea had a clear vision about the film," she adds.

The production team also met several cinematographers "at cafes near farms". "We asked the cinematographers to just observe the cows," says Mansoor. Finally they selected Magda Kowalczyk, a young Polish director of photography. "She was very respectful of the animal," adds Mansoor.

The Cannes film festival runs up to July 17. (UNI)