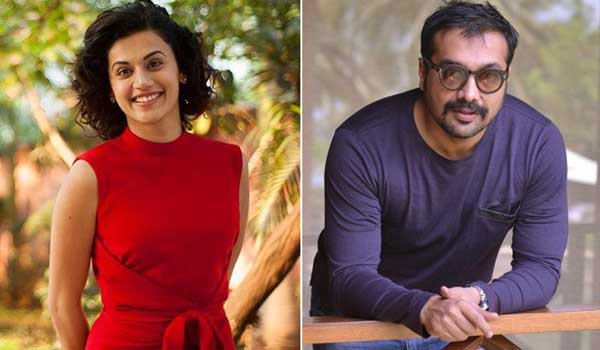 Wednesday, 3 March 2021 (17:31 IST)
Mumbai: The IT sleuths conducted a raid at the people related to show biz. The department searched the residence of fame actress Taapsee Pannu and Director Anurag Kashyap over an alleged tax evasion case.
According to sources in I-T department, searches are on at the premises of Pannu, Kashyap and Bahl in Mumbai and other locations.
While, multiple teams of the agency were carrying out searches at over 30 locations in Mumbai and Pune, including the premises of the Phantom Films and former partner of Phantom Films, Madhu Mantena, and the premises of some executives of Kwann Talent Management company.
The sources pointed out that there are some inter-linked transactions between these entities.
"Searches are aimed at gathering more evidence to further probe the tax evasion allegations," the sources said while refusing to share further details of the case.
He said that the agency sleuths are also questioning Kashyap and Pannu in connection with the matter.Phantom Films was established by Anurag Kashyap, director Vikramaditya Motwane, producer Madhu Mantena and former head of UTV Spotboy, Vikas Bahl, in 2011 before being dissolved in 2018.
However, Twitter had a different reaction after this move of the IT dept. The right side came up with some hilarious posts after the raids. Handles co-related the scene of the tapsee starrer Thappad and termed it a slap on her face. Few rib-tickling tweets are as follows.

They live off us and use people in order to sway them later, such are their intentions !

While another side felt disgruntled and mentioned it as an act of brazen vendetta as the duo have been criticizing the bills of the central govt for a long time from CAA to Farmers Bill. (WD)

In India rape victims are burned by accused, critics of gov't are raided by IT, ED & CBI..!

#TapseePannu @narendramodi and @BJP4India doesn't have time to think about creating jobs, improving economy. They are busy in identifying Their critics in Social media and sending the IT, ED and CBI to silence them..

Before Income Tax raids used to b conducted on discrepancies being found in scrutiny of one's IT Returns, but under #BJP rule they are conducted after 'Scrutiny' of one's political views on @Twitter not being palatable to Govt.
Vindictive BJP! SHAME.#AnuragKashyap #TapseePannu pic.twitter.com/E79NMOiRWE