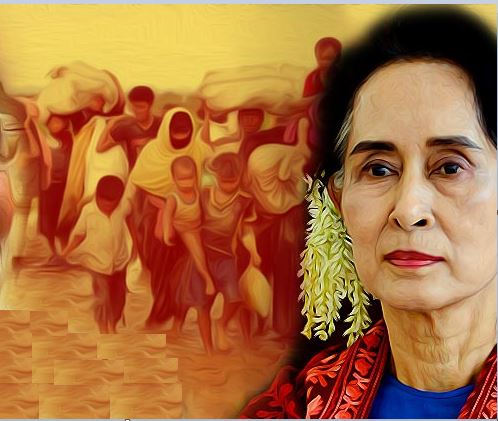 Tuesday, 10 November 2020 (09:09 IST)
Aung San Suu Kyi's National League for Democracy (NLD) is on its way to secure a majority in Myanmar's parliament despite criticism that thousands of Rohingya Muslims had been excluded from the democratic process.
Aung San Suu Kyi's National League for Democracy (NLD) on Monday claimed victory in the parliamentary elections, a day after the country went to the polls amidst international criticism over the disenfranchisement of the minority Rohingya Muslim community.
"I can now confirm that we're now securing more than 322 seats," said Monywa Aung Shin, a spokesperson for the party, signaling a majority in the 642-seat parliament. "We were aiming to secure 377 seats in total. But it would be likely more than that."
The Union Election Commission began announcing results on Monday, but it may take as long as a week for all results to be released. So far, only nine winners had been announced, all belonging to the NLD.
Suu Kyi's stronghold
Nobel peace laureate Suu Kyi's ruling party won a landslide victory in the last election in 2015 — the first polls after the nation emerged from nearly five decades of the military rule in 2011.
The NLD government has been hampered by a clause in the 2008 army-drafted constitution that gives the military 25% of the seats in the country's parliament, allowing it to block constitutional reforms.
Despite concerns about the likelihood of violence during the election, the People's Alliance for Credible Elections (PACE), one of the biggest election monitors in the Southeast Asian country, reported that Sunday voting was largely peaceful.
Disenfranchised minorities
Once seen as a stalwart of democracy in the region, Suu Kyi has seen a fall from grace in the international community for her handling of the Rohingya crisis in Myanmar. A major concern during the 2020 election was the disenfranchisement of millions of Rohingya Muslims, many of whom have been stripped of fundamental civil rights.
"A core principle of elections under international law is universal and equal suffrage, and that is not what took place yesterday [Sunday] ," said Ismail Wolff, regional director of the Fortify Rights organization.
"The international community must unequivocally condemn the disenfranchisement of Rohingya and other ethnic nationalities or risk paving the path for future violations," he added.

Saudi wants to get rid of Rohingyas living for 40 yrs, passes the buck to BANG

Over 100 dead in jade mine landslide disaster in Myanmar

First Rogingya dies of coronavirus at Cox's Bazar in Bangladesh

Interesting how Rohingya refugees are almost unaffected by COVID19