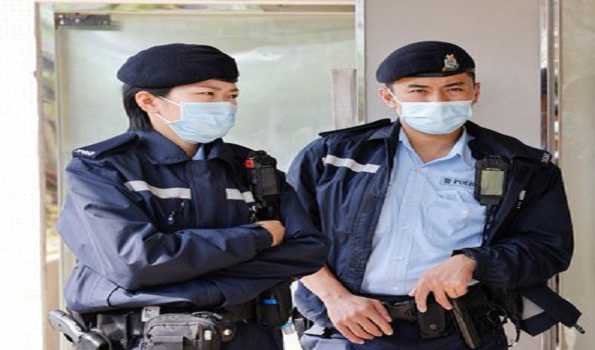 Thursday, 14 January 2021 (13:29 IST)
A total of 11 people have been arrested, linked to a daring escape attempt from Hong Kong to Taiwan. It follows recent mass arrests of pro-democracy activists by police in the semi-autonomous territory.
Hong Kong police have arrested 11 more people for suspected crimes related to helping a group of 12 activists who attempted to escape the city to Taiwan, local media reported on Thursday.
A total of eight men and three women have been detained, according to local broadcaster RTHK. They are aged 18 to 72 years.
A lawyer and district councilor named Daniel Wong and the mother of a Hong Kong pro-democracy activist were among those arrested, according to early reports.
Wong wrote on Facebook that police arrived at his apartment at 6 a.m. local time.
Who are the 'Hong Kong 12'?
The so-called "Hong Kong 12" allegedly attempted to escape Hong Kong on a boat to seek asylum in Taiwan in August 2020.
They were caught by the Chinese coast guard and detained on charges of illegal border crossing.
A total of 10 were sentenced at the end of December 2020, receiving between seven months and three years in jail.
Two, who were minors at the time of arrest, were sent back to Hong Kong.
More arrests
Thursday's arrests follows a mass crackdown by Hong Kong police on over 50 pro-democracy activists on January 6 on suspicion of "subversion" under a controversial Beijing-imposed national security law.
The arrests included at least seven members of Hong Kong's Democratic Party, the territory's largest opposition party.
Opposition figures said the arrests were linked to an unofficial primary organized by pro-democracy parties ahead of local legislative elections.
The primaries were labelled illegal by the Hong Kong's government.
China extends reach
China continues to tighten its grip on the territory that has enjoyed a measure of autonomy not found on the mainland under the so-called "one country, two systems" policy.
Beijing began stamping out political opposition to its increasingly interventionist policy, following massive pro-democracy street protests in 2019.
Beijing in 2020 passed a Hong Kong national security law targeting acts deemed secession, subversion, terrorism or collusion with foreign forces.
Critics say it diminishes the city-territory's autonomy and removes the city's independent judiciary.

Assembly polls in 5 states may be advanced by weeks

Free press is speciality and cornerstone of democracy: Javadekar on National Press Day