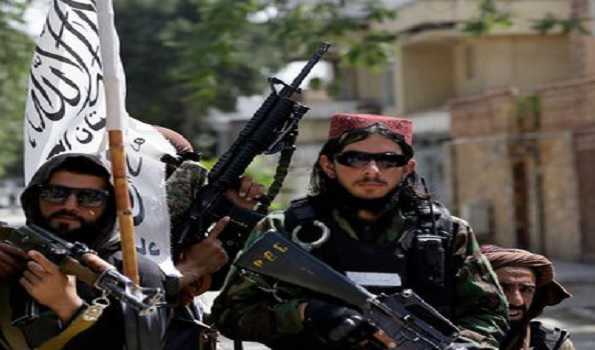 Tuesday, 31 August 2021 (22:35 IST)
Kabul: Horrifying audio of distant gunshots appears to confirm reports of "house-to-house executions" being conducted as the Taliban asserts control of Kabul and Afghanistan after the US’s withdrawal from Kabul, a news report said.

An Afghan man who worked with Americans on the ground provided Fox News with the chilling audio featuring distant gunshots.

"I think there's a conflict between the Taliban, I have no idea where I'm located. From everywhere I hear the sounds of shooting, gunfire. I have no idea how to leave," the Afghan man said in the audio clip, recorded around the time the final US plane left Kabul on Monday night.

From senior US source: house-to-house executions in Kabul following US mil departure. There are no words for what this administration has done to all of us - Afghan and American. pic.twitter.com/KzbLALKxGy

President Biden did not deny a Politico report, confirmed by Fox News, that US officials in Kabul gave the Taliban a list of American citizens, green card holders, and Afghan allies in an effort to grant them entry to the airport which resulted in outrage from military officials behind the scenes. The president said "there may have been" such a list. "Basically, they just put all those Afghans on a kill list," one defense official told Politico.

The #American 20 years war is coming to an end.#Taliban celebratory gunshots in #Kabul #Afghanistan pic.twitter.com/UEz7osIEde

Last Wednesday, a former translator for a high-ranking U.S. Army Ranger told Fox News the Taliban had started executing allies of the U.S. in public, in provinces away from the media attention of Kabul.

"They are not doing really bad stuff in Kabul right now because there's a lot of media focus on Kabul, but they already started public execution in other provinces where a lot of media is not available or covering it," the interpreter told Fox News. (UNI)

Dale Steyn retires from all forms of cricket