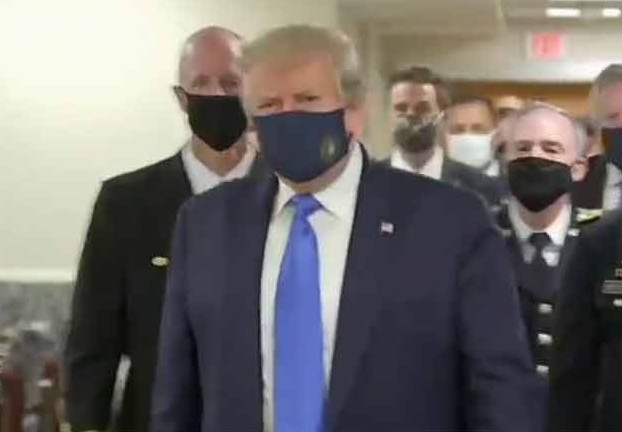 Sunday, 12 July 2020 (12:14 IST)
Washington: U.S. President Donald Trump was seen wearing a mask while visiting a military hospital near Washington, D.C., the first time he did so on camera since the coronavirus pandemic broke out in the country.

“I’ll probably have a mask,” Trump told reporters ahead of his trip to Walter Reed National Military Medical Center in Bethesda, Maryland, where he visited injured soldiers and medical workers tasked with containing the coronavirus.

“I think when you’re in a hospital especially in that particular setting, where you are talking to a lot of soldiers, people that in some cases just got off the operating table,” the president said. “I think it’s a great thing to wear a mask. I’ve never been against masks but I do believe they have a time and a place.”

Trump has been refusing to wear a mask himself since the pandemic broke out, citing his good health and frequent negative tests for the virus. “I have no problem with a mask. I don’t think you need one when you’re tested all the time, everybody around you is tested, you’re quite a distance,” he said on Thursday.

Even Republican lawmakers have advised him to do so publicly so as to curb the spread of the contagion.

Regretting the fact that the “simple lifesaving practice” of wearing a mask has been politicized to showcase whether one supports Trump or not, Republican Senator Lamar Alexander said on June 30 that he had “suggested the president should occasionally wear a mask even though there are not many occasions when it is necessary for him to do so.”

Trump wore a mask behind the scene in late May during a visit to a Ford factory in Michigan. “I did wear. I had one on before,” he told reporters on camera at the plant when asked why he decided not to wear a mask.

“But I didn’t want to give the press the pleasure of seeing it,” Trump said, showing the reporters a mask with a presidential seal on it that he said was the one he wore.

As the latest 1 million cases in the United States were added over merely 28 days, more than 20 states in the country have now mandated wearing face coverings in public, either statewide or limited to counties where the case rate has surpassed government thresholds.

Cases in the United States jumped by a staggering record of 71,389 Saturday from the previous day, according to Bloomberg News. The total number of infections in the country is approaching 3,240,000 Saturday afternoon, with death toll topping 134,000, data compiled by Johns Hopkins University showed. (UNI)

Can India really have a coronavirus vaccine ready by August?

Asia Cup 2020 scheduled in UAE has been canceled