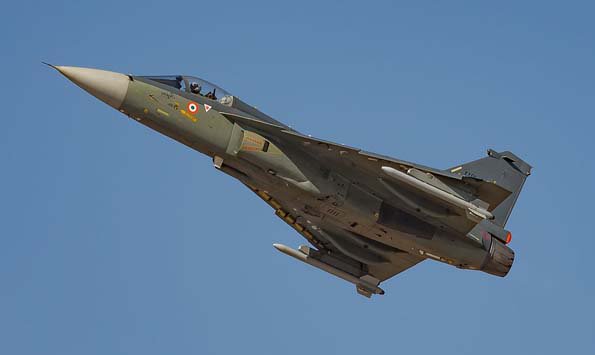 Wednesday, 3 February 2021 (19:44 IST)
Bengaluru: India exhibited world the prowess of the indigenously built fighter aircraft Light Combat Aircraft (LCA) at the 13th edition of the biennial Aero India 2021, with a scintillating display of its strike capabilities and daring maneuvers at the Yelahanka air base located on the city’s outskirts of the city.

Designed and developed by the state-run Aircraft Development Agency (ADA) of the Defence Research and Development Organisation (DRDO) and built by state-run Hindustan Aeronautics Ltd (HAL), Tejas is the world’s only light combat aircraft, which had made over 6000 no-frill sorties so far in the sky.

The IAF has already inducted the LCA-1 in its fighter fleet squadron at its Sulur air base in Tamil Nadu’s Coimbatore.

On the occasion, Mr Rajnath Singh handed over Rs 48,000 Crore agreement paper for purchase of 83 Tejas to the HAL Chairman and the Managing Director R Madhavan for the Indian Air Force.

He said that “It is the largest ever defence order procured by the HAL, to supply the LCA Tejas to the defence forces”.

The US B1-Bomber also flew along with LCA at the opening event.

The maiden joint aerobatics by Surya Kirans and Sarang choppers was the highlight of the show on the occasion.

Both the aerobatic teams flew in heart formation with their trail smoke on a bright sunny day. (UNI)