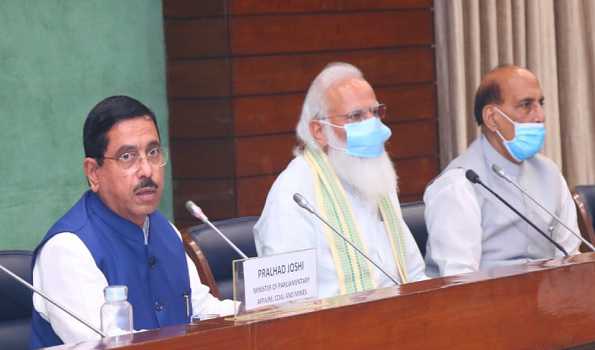 Sunday, 18 July 2021 (18:46 IST)
New Delhi: The government on Sunday held an all-party meeting with the floor leaders of various parties to discuss the monsoon session of Parliament which will begin from July 19, Monday, and said it was ready to discuss any issue under the rules.

Prime Minister Narendra Modi, who chaired the meeting, called for healthy discussions in Parliament and sought cooperation of the leaders of all political parties.

"As per our traditions of a healthy democracy, issues concerning the people should be raised in an amicable manner, and the Government should be given opportunity to respond to these discussions," Mr Modi said.


The Prime Minister condoled the loss of lives during the ongoing COVID-19 pandemic. He said as most parliamentarians are vaccinated now, the government expects the efficient functioning of the House.

From the government side, Defence Minister Rajnath Singh, Commerce and Industry Minister Piyush Goyal, and Parliamentary Affairs Minister Pralhad Joshi were among those who attended the meeting.

Mr Joshi, at the start of the meeting, said that the government was ready for discussion on any topic under the rules.

The monsoon session will commence from Monday and continue till August 19. During the 19 sittings of the session, 31 government business items, including 29 Bills and two financial items, will be taken up. Six bills will be brought to replace the ordinances, the Parliamentary Affairs Minister said.

The House will see the new Cabinet of the Prime Minister. Over three dozen new faces were inducted into the Cabinet earlier this month in a massive rejig by Mr Modi.

Mr Modi, as per the convention, will introduce his new Cabinet to the members of the House on the first day of the session.

Also, those who became the members of the Lok Sabha by winning bypolls that were held along with Assembly polls to four States in April this year, will take the oath on Monday. (UNI)