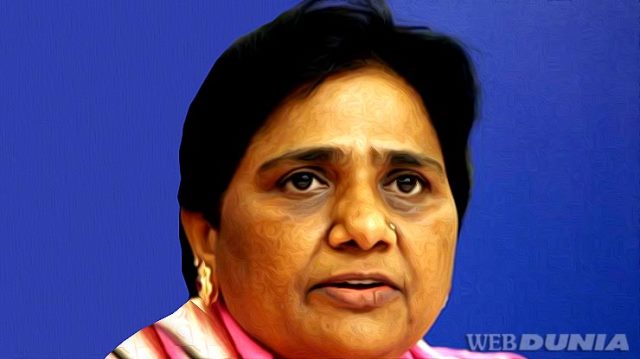 Friday, 15 January 2021 (13:55 IST)
Lucknow:On her 65th birthday on Friday, Bahujan Samaj Party Chief and former Uttar Pradesh Chief Minister Mayawati made it clear that her party will not be forging any alliance with any big political party for the upcoming Uttar Pradesh and Uttarakhand assembly elections.The BSP supremo also announced that her party will ensure free corona vaccine if her party is voted to power.
Speaking on the occasion, BSP Chief said, “Our party has been dedicated towards the betterment of the poor and the neglected. That is why BSP had managed to run its government in the state on four occassions. But castiest, capitalist and narrow minded opposition parties don’t like it and that is why they united against the BSP and hatched conspiracies to stop our party from coming to power in the state. Now these opposition parties are busy dividing votes of the weaker sections of the society.”
“Our party workers have to overcome several obstacles and work for the weaker sections of the society, they have to be positive and work for the people in order to return the party to power like they did in the year 2002,” added the BSP chief while appealing her party workers to celebrate her birthday as Jan Kalyankari Diwas today.
“The state assembly polls are due in Uttar Pradesh and Uttarakhand shortly, here BSP wants to make it clear that unlike it's alliances with other parties for the Bihar assembly polls and Lok Sabha polls, we will not be forming any alliance with anyone. BSP will contest in both UP and Uttarakhand on its own and will form the government,” stated Mayawati.
The BSP Chief also requested that the Central Government should agree to the demands of the farmers who are protesting against the three farming laws. The BSP chief also welcomed the vaccination drive starting from Saturday and urged that the vaccine be given to all the people free of cost. “If the central and UP state government doesn’t give free vaccination then BSP will ensure free vaccination when it comes to power,” Mayawati said. On the occassion, Ms Mayawati also released a book " A Travelogue of My Struggle Ridden Life and BSP Movement, 16" which she saysid will further strengthen the self respect of the cadre and the movement of the party.
BSP is celebrating the party president Mayawati's 65th birthday as 'Jan Kalyankari Diwas' in a simple manner in view of the COVID-19 pandemic.
The BSP, earlier, used to celebrate the occasion in a grand manner and used to collect fund for the party but after it faced intense criticism on the issue, the party started celebrating the day as 'Jan Kalyankari Diwas'.UP chief minister Yogi Adityanath also wished the BSP chief on her birthday by telephoning her on Friday morning.
On the eve of her birthday, Mayawati herself tweeted on Thursday that her birthday should be celebrated in a simple way due to the COVID pandemic. "The day should be celebrated as Jan Kalayankari Diwas and party workers and leaders should help the poor and needy persons," she said.
A senior BSP leader here on Friday said that Ms Mayawati has directed party leaders and workers to make her birthday celebration a low affair and use the occasion to help migrants, farmers, labourers and the poor people who are facing problems due to the economic slowdown. Under the Jan Kalyankari Diwas programme, the BSP leaders will assist the needy, poor and the handicapped.
"We will visit villages and hospitals to distribute sweets and fruits," said the BSP leader.She has also asked the party leaders to follow the COVID-19 protocol announced by the government during her birthday celebration. There would be no gathering or assembly of workers, the party said.
However recently in November last, Mayawati's father expired which is also one of the reason for low key celebrations of her birthday this year.(UNI)

10 candidates, including 8 of BJP elected unopposed in Rajya Sabha

Alongside Bihar polls & MP by-polls, UP too gearing up for by-polls for 8 seats