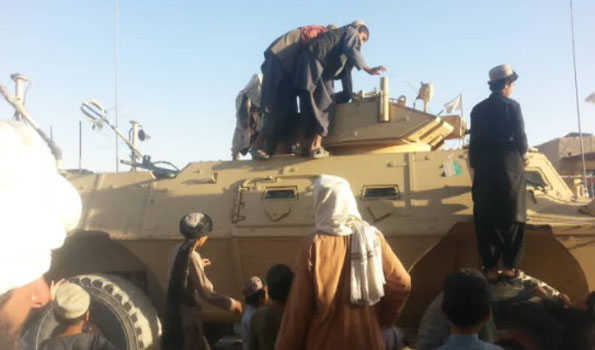 Tuesday, 10 August 2021 (16:28 IST)
Kabul/New Delhi: As the Taliban intensified their attacks on Mazar-e-Sharif, India on Tuesday began evacuating its nationals, including diplomats and staff of the consulate, from the northern Afghanistan city as a matter of caution.

The Indian Embassy in Kabul also asked members of the Indian media arriving or staying in Afghanistan to contact the Embassy security wing for a personalized briefing, including advice on the locations they are planning to travel to.

"This will help media persons make a better assessment of the risks involved, given the rapid changes in the security situation taking place in different parts of the country,” the Embassy said in an advisory.


In the advisory, the Embassy asked Indian nationals to “make immediate travel arrangements to return to India”.

It advises Indians to keep themselves updated on the availability of the commercial flights and make immediate travel arrangements to return to India.#Afghanistan pic.twitter.com/olC9MhxoxC

Earlier last month, India had evacuated its staff from the Consulate in Kandahar in the wake of the Taliban attack on the city.

The Indian Consulate in Mazar-e-Sharif on Tuesday tweeted that it has arranged a special flight to evacuate its citizens from the city.

In a series of tweets, the Consulate urged Indian citizens to contact the Indian mission.

It said that a special flight is leaving from Mazar-e-Sharif to New Delhi.

“Any Indian nationals in and around Mazar-e-Sharif are requested to leave for India in the special flight scheduled to depart late today evening,” it posted.

In an advisory, the Indian embassy in Kabul said that since violence in many parts of Afghanistan has escalated commercial air travel services to many provinces and cities are being discontinued.

It also asked Indian companies operating in Afghanistan to “immediately withdraw their Indian employees out of project sites in Afghanistan before air travel services get discontinued.

“All Indian nationals visiting, staying and working in Afghanistan are strongly advised to keep themselves updated on the availability of commercial flights … and make immediate travel arrangements to return to India before commercial air services are discontinued”, it said.

It also asked Indians working for Afghan or foreign companies in the country to immediately request their employer to facilitate their travel back to India, or contact the Indian embassy.

The urgency to evacuate Afghanistan comes as the Taliban have intensified attacks on Mazar-e-Sharif. The Islamist militia announced on Monday that they were moving in on Mazar-e-Sharif and have launched a four-pronged attack to take over the city

Mazar-i-Sharif is the largest city in the north and is considered a lynchpin to the Afghan government’s control over the area.

On Monday, the Taliban said they have captured Aibak, the capital of the northern province of Samangan, the sixth provincial capital to be taken over by the Islamist militia in four days.

The Taliban have also reportedly taken over Kunduz, Takhar, Jowzjan, Sar-e-Pol, Nimruz, while fierce fighting is raging between the militants and government forces in Herat, Kandahar and Helmand.

On Saturday, External Affairs Minister S. Jaishankar had conveyed to Qatar Special Envoy Mutlaq bin Majed Al-Qahtani, during a meeting here, that the “rapid deterioration of the security situation in Afghanistan is a serious matter”.

Jaishankar had shared India’s perspectives on the recent developments in the war-torn country with Qahtani, the Special Envoy of the Foreign Minister of Qatar for Counter-terrorism and Mediation of Conflict Resolution, who was on a visit to India.

India has 1,500 nationals in Afghanistan, including Government of India officials, the Ministry of External Affairs has stated in a reply to a Parliament question.

ICC to push for cricket's inclusion in Olympics

Neeraj Chopra, among other medallists felicitated by Sports Minister