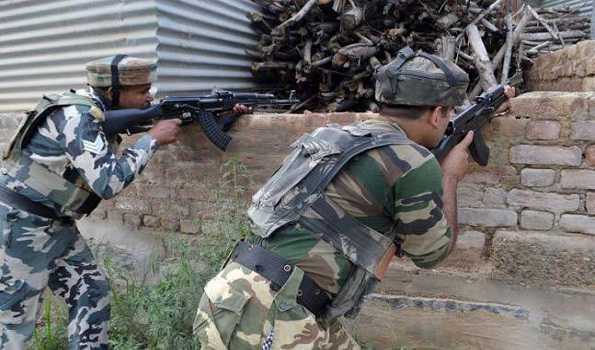 Thursday, 19 August 2021 (14:16 IST)
Jammu: Security Forces on Thursday neutralised one terrorist while one soldier attained martyrdom in a day long fierce gun battle that broke out early morning in Thannamandi area of Rajouri district in Jammu and Kashmir.

However, arms and ammunition was recovered from the encounter site and the operation was called off in the evening.

Defence spokesman, Lt Col Devender Anand said that based on specific input a joint cordon and search operation was launched by Army and Police in village Danna in Thanamandi tehsil of District Rajouri.


"During the search operation in forested area, the search party led by Junior Commissioned Officer, Subedar Ram Singh was fired upon by terrorist from a nearby densely forested area," he said.

The Defence Spokesman said that the Junior Commissioned Officer immediately retaliated the fire and in the ensuing fire fight, one terrorist was neutralised while Subedar Ram Singh suffered a gunshot wound.

"The valiant Junior Commissioned Officer was provided immediate first aid and evacuated to the nearest Hospital, however, he succumbed to his injuries," he said.

He is survived by his wife, son and daughter.

Subedar Ram Singh was a brave and highly motivated soldier and the Nation will always remain indebted to him for the supreme sacrifice and devotion to duty, he said.

Security forces however, have called off the operation and recovered arms and ammunition during searches carried out near the site of gun battle.

One AK 47 rifle, one pistol, magazines and ammunition was recovered from the site of encounter, police said adding that at the operation has been called off. (UNI)