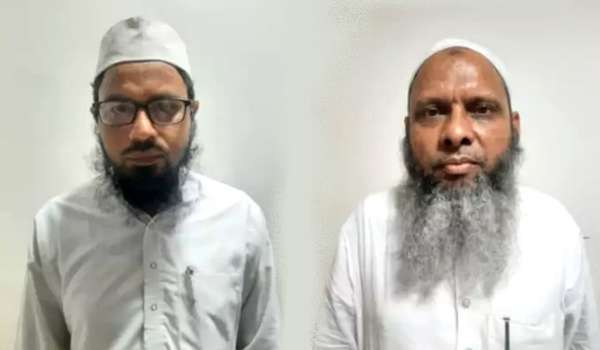 Tuesday, 22 June 2021 (20:53 IST)
Lucknow: A day after the Anti-Terror Squad (ATS) of Uttar Pradesh police arrested two people in the alleged religious conversion racket, the cops now invoked the National Security Act (NSA) against the accused on directions of the chief minister Yogi Adityanath.
The arrested persons have been identified as Mufti Qazi Jahangir Alam Qasmi and Mohammad Umar Gautam by Additional Director General of Police (Law and Order) Prashant Kumar.
Both accused are residents of Jamia Nagar in New Delhi. According to reports, the properties of the accused will also be confiscated. On Tuesday, the ATS also got their police custody remand for further interrogation.

It may be mentioned that the alleged conversion racket was busted by the ATS following the registration of an FIR in the case at ATS police station in Lucknow.

As per reports, two men of Delhi's Jamia Nagar, allegedly running an outfit involved in converting deaf and dumb students and other poor people to Islam in Uttar Pradesh with funding from Pakistan's ISI. Moreover, children and women were also lured in with false promises of cash, job, and marriage, and later, converted. It is being said that Gautam, who is himself a convert to Islam from Hinduism, disclosed of having converted at least 1,000 people to Islam. "I converted at least 1,000 non-Muslims to Islam, marrying them all to Muslims," Gautam, who himself hot converted to Muslim from Hindu in the 70s , reportedly disclosed during interrogation.(UNI)

In worst kind of culpable homicide,Woman sentenced to 30 years for assaulting maid

In worst kind of culpable homicide,Woman sentenced to 30 years for assaulting maid

Monsoon likely to be delayed in these north Indian states

Myanmar: 4 dead in Mandalay as junta clashes with militia