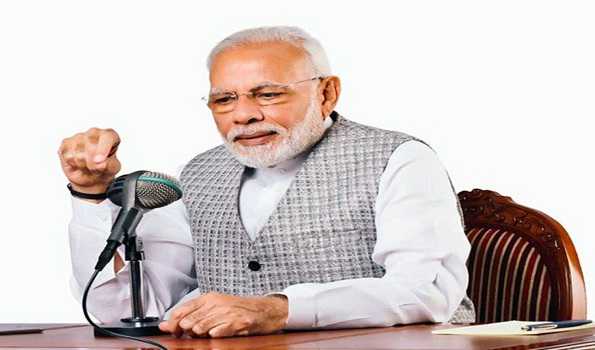 Sunday, 31 January 2021 (15:01 IST)
New Delhi: The Prime Minister Narendra Modi on Sunday said that India’s vaccination drive is turning out to be exemplary to the world and it has been undertaking the world’s biggest Covid Vaccine Programme.

Addressing the nation on the 73rd episode of Man Ki Baat via radio, he said “India’s fight against Corona became an example, our vaccination Programme too is turning out to be exemplary to the world. Today, India is undertaking the world’s biggest Covid Vaccine Programme.”

He further said “Along with the biggest Vaccine Programme, we are vaccinating our citizens faster than anywhere in the world. In just 15 days, India has vaccinated over 30 lakh Corona Warriors, whereas an advanced country such as America took 18 days to get the same done; Britain 36 days.!”

Noting that the ‘Made in India’ vaccine was a symbol of India’s self-reliance and a symbol of her self-pride, the Prime Minister said that he has received messages of many countrymen saying that the Indian vaccine has generated a new self-confidence within.

“Kirti ji writes from Madurai said that the that many of her foreign friends are messaging her thanking India. Kirti ji’s friends have written to her that the way India has helped the world in the fight against Corona has enhanced the respect for India in their hearts”, he noted.

The Prime Minister also said that these days, he too, has been receiving similar messages for India from Presidents and Prime Ministers of different countries of the world and recently the President of Brazil, in a tweet thanked India - every Indian was gladdened at that.

People residing thousands of kilometers away in remote corners of the world are deeply aware of that context in Ramayan; they are intensely influenced by it. This is a specialty of our culture, he said.

Talking further about the vaccination Programme, Mr Modi also said that during the moment of crisis, India has been able to serve the world today, since she is capable, self-reliant in the field of medicines, vaccines and which the same thought underpinned the Atmanirbhar Bharat Campaign.

The more India is capable, the more will she serve humanity; correspondingly the world will benefit more, he added. (UNI)