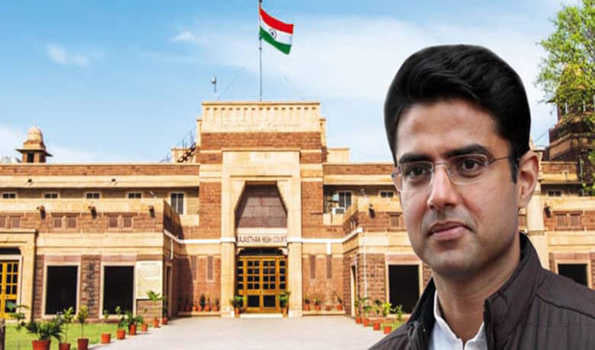 Friday, 24 July 2020 (13:09 IST)
Jaipur:Rajasthan High Court on Friday ordered status quo on the disqualification notices issued by the Speaker to the rebel legislators under anti-defection law.With this, Speaker C P Joshi will not be able to take any action against the 19 rebels, including Sachin Pilot.
However, on the larger question of constitutionality of the notices despite Assembly not being in session, a divisional bench of Chief Justice Indrajit Mahanty and Justice Prakash Gupta deferred the verdict till the Supreme Court decides the validity of anti-defection law in the case.
The rebels had approached the High Court with a writ petition on being served notices of disqualification by the Speaker.  The notice came hours after they skipped Congress Legislature Party meeting in Jaipur called to discuss the friction between the camps of Pilot and Chief Minister Ashok Gehlot.
Noted Advocate Harish Salve, appearing for the petitioners, contended that issuing notices for raising voice against the chief whip amounts to curbing the voice of dissents.
However, senior lawyer Abhishek Manu Singhvi told the court that they (rebels) were not raising the voice but breaking the party. Also, the Speaker's notice is beyond judicial review, he stated.
On Wednesday, the Speaker knocked the doors of the Supreme Court with a petition alleging that the judiciary was encroaching upon the powers of the legislative.
The Apex Court, on Thursday, refused to interfere in High Court's proceedings and placed the matter for hearing on Monday.If the disqualification of 19 MLAs take place, the strength of the Assembly will be reduced to 181, with a new halfway-mark of 91 required to rule the House.
The disqualification will make it easier for Chief Minister Ashok Gehlot to retain the majority.In the present Assembly, Congress has 107 MLAs while Bharatiya Janata Party has 72.(UNI)

Rajasthan HC give verdict on rebel's disqualification on 24th July