Ram Temple: Sanctum sanctorum to open for prayer by 2023 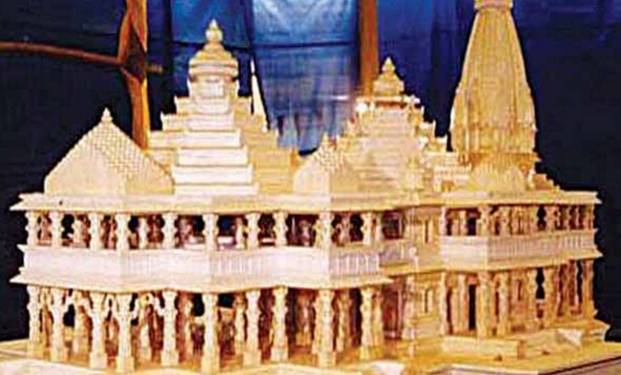 Thursday, 5 August 2021 (14:51 IST)
New Delhi: The construction of the base for Ram Temple in Ayodhya is half done, and the sanctum sanctorum of the deity will be ready by 2023 allowing prayers to start, a VHP spokesperson said on Thursday, a year since the foundation stone was laid.

Vishva Hindu Parishad (VHP) National Spokesperson Vinod Bansal told UNI the work is on at full swing, and by October, the base of the temple will be ready.

He also said that the bricks collected over the years for the temple were not being used in the main structure, but will find "respectable placement" in the complex.


"Construction of the Ram Mandir has picked up pace," he said.

According to Bansal, construction of the sanctum sanctorum will be done by 2023, so that prayers can start. The full structure of the temple is likely to finish by 2025, however, development of the entire complex will take time.

"Both heritage and science are being taken together, the temple will represent national ethos," Bansal said.

He also said that the Valmiki temple in the same complex with the Ram temple will be unique feature.

Bansal said construction of the base was the biggest challenge.

"There was a 40 feet deep layer of debris, under that there was sand. We first tried using pillars, but it was concluded that pillars would not be able to support the structure," he said.

The experts eventually decided to use an alternate method, for which the area, around 300 feet by 400 feet in size, was dug up to 40 feet deep and the debris and soil was removed.

For the construction of the base, layers of a mix of fly ash and cement is being filled in the whole area.

"Once the base is ready, it will be like a big stone which will support the grand structure. The temple will be constructed in such a way that it will not get damaged for a thousand years," he said.

He said the base will be finished by October.

"Once the base is ready, construction will not take long as the blocks are ready, they just have to be placed. There are no bricks, cement, or iron being used in the temple structure. It will be made entirely of stones from Rajasthan," he said.

While Kota stones will be used in the interior, exterior structure will be made with Dholpur and Jodhpur stones," he said.

Asked about the bricks collected for over 30 years for the temple, which are eventually not being used in the structure, he said they will get a respectable placement.

"We will use those bricks as well somewhere in the complex even though we can't use them in the main structure," he said.

He also said experts from institutions around the country, including IITs have been consulted over the project.

"Very soon Ram lala will be in his home," he said.

The VHP has been at the forefront of the Ram Jamabhoomi movement, in mobilizing support as well as collecting funds for the temple.

The foundation stone for the Ram temple was laid down in Ayodhya on August 5, 2020 by Prime Minister Narendra Modi. (UNI)

Tokyo 2020: Vinesh Phogat loses in quarters, but still has a chance to win bronze if…