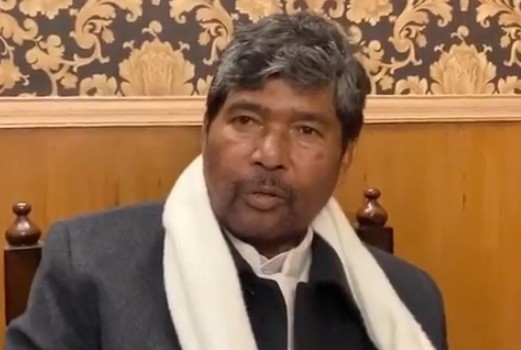 Wednesday, 7 July 2021 (22:51 IST)
Patna: Lok Sabha MP Pashupati Paras inducted into the Union cabinet from the Paras faction of Lok Janshakti Party ( LJP).Mr Paras, a graduate, was elected to the Lok Sabha for the first time in the 2019 parliamentary elections from Hajipur, the workplace for his eldest brother late former Union Minister Ramvilas Paswan, founder leader of the LJP. He has been alloted Dairy Food and Processing Ministry.
Mr Paras, younger brother of late Ramvilas Paswan was also state president of the Party in Bihar.After the demise of the LJP founder leader and former Union Minister Ramvilas Paswan, Mr Paras and his nephew LJP MP and national president of the party Chirag Paswan were at loggerheads over Ramvilas Paswan's legacy in the Party.
Mr Paras along with four other MPs of the party had recently formed a separate faction with a claim on the party. The faction had also declared Mr Paras as national president of the party.
Mr Paras who stepped into politics with the help of his eldest brother Ramvilas Paswan was
born on July 12, 1952, at Shaharbanni village in Khagaria district. After completing his primary education from the village, graduated from Kosi college of Khagaria and did his Bachelor of Education from the teacher training college of Bhagalpur.

Pashupati Kumar Paras was five-time MLA from Alauli. He won his first assembly election in 1977 as JNP candidate. Since then he had contested the elections as Lok Dal (LKD), Janta Party (JP) and LJP candidate.

He served as a minister for Animal and Fish Resources Department in Bihar government.
Mr Paras who served thrice as a minister in Bihar had lost the election in 2015. At the time of his appointment as a Minister in the state 2017, he was neither a member of Assembly nor Council and was therefore later accommodated as an MLC from the Governor's quota.(UNI)