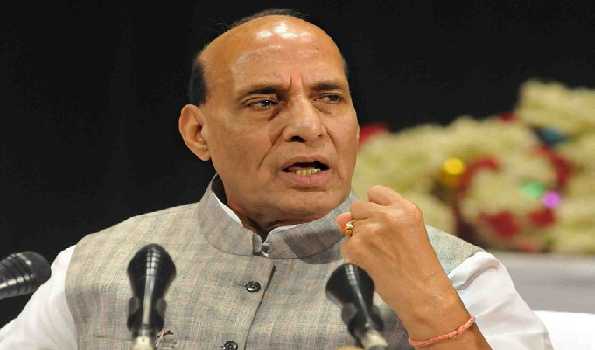 Monday, 28 June 2021 (19:30 IST)
Leh: Asserting that Jammu and Kashmir was divided into two Union Territories due to militancy and lack of socio-economic development, Defence Minister Rajnath Singh on Monday said the militant activities have gone down significantly during the last two years.

“The Centre two years back made a historic decision under which J&K and Ladakh were made two separate Union Territories. Why did we make J&K a UT? There can be various reasons. But, militancy and lack of socio-economic development were the two main reasons. No matter how much assistance the Centre might have given, but the socio-economic development was not possible,” Mr Singh said on Monday after inaugurating 63 infrastructure projects constructed by Border Roads Organisation (BRO) in eight states from the Union Territory on the second day of his three-day visit to Ladakh.

Commending the role of security forces in J&K, Mr Singh said coordination with which security agencies, including Army and Police, are working is the key element in their success in anti-militancy operations. “Be it, Army, Police, paramilitary and IB (Intelligence Bureau), everyone is working in coordination with each other to eliminate militants in the valley,” he added.

However, the Defence Minister said ample opportunities are given to active militants to surrender even during live encounters. “The Army doesn’t go on a killing spree of militants… Security forces in Kashmir have been trying to persuade militants to surrender and join the mainstream. Militants are assured even during encounters that if they surrender, they will not be fired upon. They are assured that the administration will help them to lead a normal life,” he added.

Mr Singh said many important steps have been taken on the development front since J&K was divided into two UTs. “In energy sector, projects like intra-state power grids, eight hydropower projects, first even geothermal field with the support of ONGC has been started in Ladakh. No one bothered to do any of this before… this happened after the formation of UT. Many developmental projects and central sponsored schemes have been taken up in Ladakh which were never extended to this part of the country,” he said.

Mr Singh on Sunday arrived in Ladakh to review the overall security situation in the hinterland and along the borders in the Union Territory. The Defence Minister’s visit to Ladakh holds significance as it comes days after India and China held a fresh round of talks and agreed to resolve ‘remaining issues’ to end the prolonged military standoff that began in May last year along the LAC in eastern Ladakh.

On Sunday, the defence minister met elected representatives of Ladakh Autonomous Hill Development Councils (LAHDC), Kargil and Leh. Defence Minister Rajnath Singh also interacted with 300 veterans at Leh and reiterated the Government’s commitment towards the welfare of the ex-servicemen. He was also briefed about the security situation along the Line of Actual Control (LAC) with China in Eastern Ladakh by the senior Army officials, including GOC Fire and Fury Corps. (UNI)