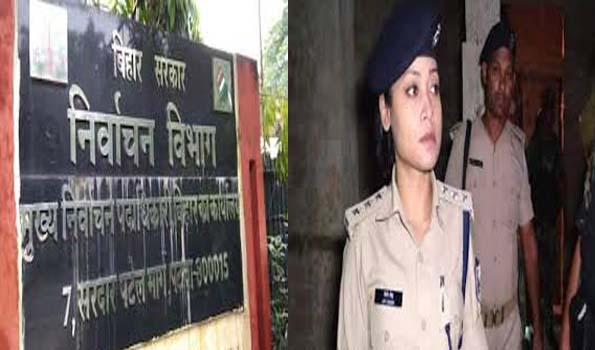 Friday, 30 October 2020 (14:43 IST)
Patna: The Election Commission ordered immediate transfer of District Magistrate (DM) and Superintendent of Police (SP) of Munger for mishandling a situation which turned violent allegedly owing to police excesses during the immersion of Durga idols.
Sources of the office of Chief Electoral Officer (CEO) said here that in the light of the prevailing situation in Munger, Election, Commission of India (ECI) has ordered immediate removal of SP Lipi Singh and DM Rajesh Meena of Munger.
ECI has also ordered inquiry into the entire incident by Mr. Asangba Chuba Ao, Divisional Commissioner, Magadh, to be completed within the next seven days, sources added.New DM and SP will be posted at Munger today itself, as per directive of ECI.
It may be recalled here that one person was killed and several others were injured as a result of firing and stone pelting by anti-social elements during immersion of Goddess Durga near Deendayal Upadhyay Chowk under Kotwali police station area few days back, Munger police had said. Locals, however, had alleged that police excess was the reason behind the incident.
Grand Alliance's CM candidate in the ongoing Bihar Assembly Elections Tejaswi Prasad Yadav and Congress leader Randeep Surjewala had demanded judicial inquiry into the incident and compared it with that of police action committed against people at Jaliawala Bagh during British regime.(UNI)