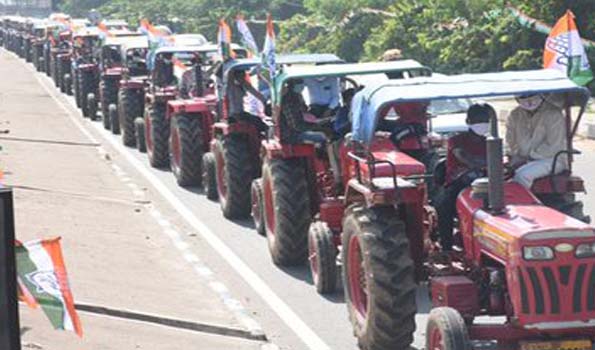 Monday, 25 January 2021 (17:48 IST)
On the Republic Day 26th January, 2021 for the first time since independence the farmers will march in a unique Kisan Parade with National Flags. The farmers have been protesting peacefully against the 3 Farmer Acts and Amendments to the Electricity Act as they claim that these Acts threaten agriculture and will facilitate corporate profiteering at the expense of the farmers. It is also going to affect food security of the country and promote corporate hoarding and black-marketing which will lead to price rise for the masses.

The struggle has been going on for the last eight months and is only growing in strength day by day. The Central Trade Unions, Nation for Farmers, different class and mass organisations as well as people from different walks of life have come wholeheartedly in support of the peaceful struggle. In the last two months lakhs of farmers have been sitting in protest seeking the repeal of the Farmer Acts and demanding assured remunerative Minimum Support Price for their produce. More than 150 farmers have died in this struggle that has continued in the biting cold braving incessant rains for many days.

On this Republic Day Kisan Parade will be held across India in all States and Districts. Thousands and thousands of tractors will also be entering into Delhi along the designated routes without disrupting any official function. On behalf of the Delhi Welcome Committee For Kisan Parade, Navnit Tiwari, P. Krishnaprasad and Deep Khatri have requested all the citizens of Delhi to come out overwhelmingly in support of the Annadatas.

Govt proposes to put farm laws on hold for 1.5 years, next round of talks on Jan 22