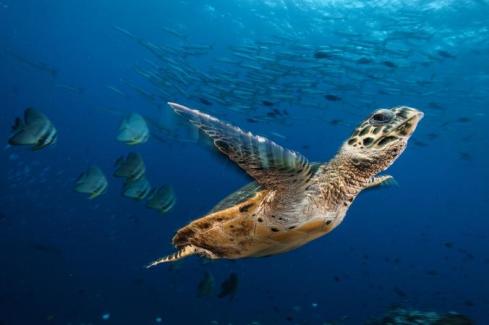 Thursday, 11 March 2021 (23:38 IST)
Kendrapara: The mass nesting of Over 2000 Olive ridley turtles will commence at any moment as over 2000 turtles have laid eggs at Nasi 2 of Gahirmatha marine sanctuary in the last 48 hours.


The forest personnel are very much optimistic that at any moment, Nature’s rare phenomenon “arribada” (a Spanish term used for mass nesting) will commence at the world’s largest rookery of the species.

The prevailing atmosphere including the environment, temperature, beach condition, is conducive for the Olive ridley turtle to lay eggs en mass at the golden beaches of Gahirmatha Marine Sanctuary.

If sporadic nesting would continue in high numbers tonight than then there are every possibility that the mass nesting would commence at any moment at the Nasi-II beach, Mr Dash said.

Keeping in mind Olive Ridley sea turtle’s mass nesting phenomenon is round the corner, the forest personnel have made segments at Nasi-II for counting turtle’s nest.

Gahirmatha Marine Sanctuary is considered as the largest rookery for the endangered Olive Ridley sea turtle, protected under Schedule 1 of Wildlife Protection Act,1972 and accorded the highest protection like endangered tigers.

Turtle movement is found at the deep sea of the Bay of Bengal in between October last week and November first week, even the mating pair generally found in mid-November at the deep sea.

The forest personnel of Gahirmatha Marine Sanctuary have started their preparation to provide a tranquil atmosphere for the marine species for their smooth sojourn to the sandy beaches to lay eggs.