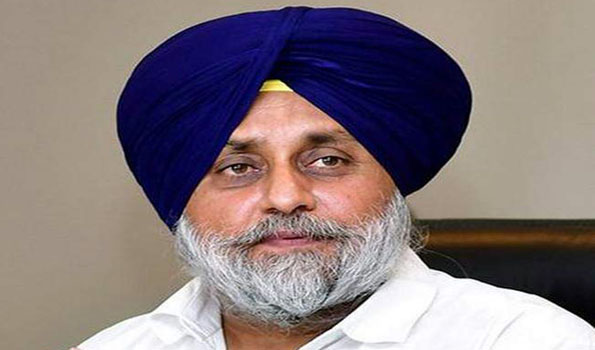 Friday, 16 July 2021 (20:24 IST)
Jalandhar: Shiromani Akali Dal president and former deputy chief minister Sukhbir Singh Badal on Friday claimed that several top BJP leaders of Punjab, who are angry with the party over the three new agricultural laws of the central government, are in touch with him to join SAD.

Addressing a press conference here, Mr Badal said that not only BJP leaders but also the leaders of many other parties are looking for an opportunity to join his party.

Referring to the ongoing rift in the Congress party in Punjab, he claimed that due to the infighting between the Congress leaders and the "wrong policies" of Capt Amarinder Singh government, the people are fed up with the present Congress regime in the state and the people would teach a lesson to the ruling party in the Vidhan Sabha polls scheduled for early next year. He said confidence that he was sure that the government of Capt Amarinder Singh will be overthrown.


The SAD chief said that the civil war going on between Capt Amarinder Singh and Navjot Singh Sidhu in the Punjab Congress would be the cause of the downfall of the Congress. He claimed that both the Congress leaders are engaged in degrading and uprooting each other, it remains to be seen who will uproot whom.

Asked how he would view Sidhu if he was made a member of the Punjab Congress and a case of Bargadi indecency was raised on his behalf, Mr Badal said that Captain Sarkar was using political stunts in the matter. There is nothing against us in this case. The government had even submitted challans. He said that the truth is the truth and no one can deny it.

He said that the alliance with Bahujan Samaj Party (BSP) in Punjab means that the power of the state will come in the hands of Akali-BSP in the next assembly elections. He said that the people of Punjab should not forget that no matter how many welfare schemes are running in the state, whether it is Aata Dal scheme, Post Matric Scholarship scheme, Bicycle scheme for girls or Shagun scheme, were started by his father and former Chief Minister Parkash Singh Badal. (UNI)