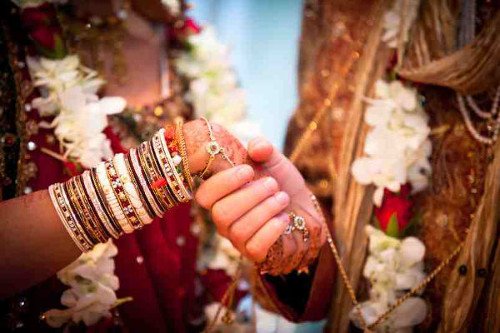 Saturday, 21 November 2020 (15:42 IST)
The celebrated IAS toppers of 2015 where Tina Dabi secured the first position in the UPSC Civil Services Examination and Athar Amir stood second; have filed for a divorce at a family court in Jaipur.
The couple met during their training sessions and fell in love right after. They tied the knot in 2018 in Pahalgam Anantnag in Kashmir at the groom’s abode after dating each other for a year.
Tina Dabi looked very happy during her wedding and also said she didn’t bother people’s opinions on their inter-religion love marriage. “It was love-at-first-sight,” she said.Tina and Athar are both officers in the Rajasthan cadre and currently posted in Jaipur.
The couple got married by their own will. However, it was tagged as love-jihad by
the Hindu Mahasabha and thus became a hot topic of discussion. Some also
praised the relationship and called it a good step towards inter-faith harmony.

One such mediocre comment was made by the former Congress president Rahul Gandhi on Twitter on the occasion of the couple’s wedding indirectly portrayed a subtle message of the fears of inter-faith marital relations between two people. He also targeted the government for increasing communal hatred.

The IAS couple filed for divorce at Jaipur’s Family Court on November 17, 2020. The divorce has been filed with mutual consent. They wrote in the file that they have been living separately for a long time and now want to discontinue their marriage.
Sources say the couple had been going through a rough patch for a while. After marriage, Tina had added “Khan” in her name on Twitter, which she discontinued to keep, a few days back. She even removed “Kashmiri Bahu” (Kashmiri daughter-in-law) from her bio on Instagram. Also, Athar unfollowing Tina on social media around the same time hinted at the tension between the couple.(WD)

Tanishq takes down adv after backlash, 2.5 % slump in NSE

Assam BJP to launch fight against love jihad ahead of polls