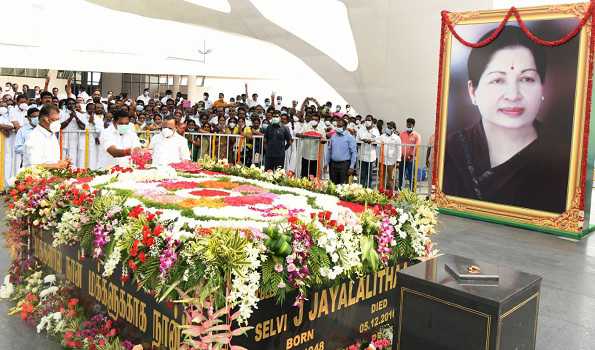 Mr.Palaniswami unveiled a plaque and lit a lamp to mark the inauguration of the memorial in the presence of Deputy Chief Minister O.Panneerselvam, Assembly Speaker P.Dhanapal, Ministers, Chief Secretary K.Shanmugam and senior government officials.

The inauguration of Veda Nilayam memorial comes a day after the opening of a phoenix-shaped memorial for Jayalalitha at Marina.

The memorial, however, will not be open to the public in view of a MadrasHigh Court directive.

The Court last night has restrained the Tamil Nadu government from allowing the general public inside the premises in view of litigation pending before the court.

Only main gates to the bungalow should be opened and the participants should access only the garden, the HC said.

The HC also directed that the keys of the entire premises should be handed over to its Registrar General after the inauguration ceremony.

A large number of AIADMK supporters gathered outside the memorial and raised slogans hailing Jayalalitha. They were disappointed as they were denied entry in view of the court directive.

Jayalalithaa’s legal heirs--niece J Deepa and nephew J. Deepak--had objected to the inaugural on the grounds that the inventory of the articles inside the bungalow was not taken in their presence.

The interim orders by the High Court were passed on writ petitions filed by them challenging the acquisition proceedings.

More than four years after the demise of Jayalalitha, Veda Nilayam, which was once considered the power centre of the party for around three decades, was opened today.

Veda Nilayam is located in a ten grounds land in Poes Garden. It was purchased by Jayalalitha’s mother Sandhya in July 1967 for a sum of Rs 1.32 lakhs. The house warming ceremony took place on May 15, 1968, when she was a leading actor in Tamil film industry.

Jayalalitha had lived in Veda Nilayam for over 44 years since 1968 and till her death in December 2016 after being hospitalised for 75 days.

Mr.Palaniswami, after opening the memorial announced that henceforth Amma’s (Jayalalitha) birthday on February 24 will be celebrated as a government function every year. He also recalled the contributions of Jayalalitha to education, women safety and children. (UNI)

CBSE to announce board exams datesheet on this day; Check out all other details