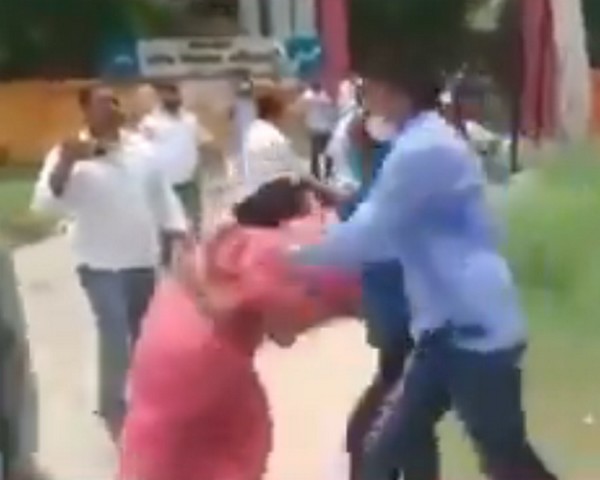 Friday, 9 July 2021 (17:05 IST)
Lucknow: On the direction of Uttar Pradesh Chief Minister Yogi Adityanath, a Circle Officer, SHO and three SIs have been suspended while both the accused are arrested for misbehaving with a woman during the nominations for Block Pramukh polls.


The accused who allegedly assaulted her is a supporter of an Independent candidate and has been arrested, the police said.

Meanwhile, castigating the Samajwadi Party leader and former Chief Minister Akhilesh Yadav for his baseless comments, Uttar Pradesh Deputy Chief Minister Dinesh Sharma said it is not a surprise for us that SP’s politics is based on lies and fallacy.

“Akhilesh did not take a second to blame CM Yogi without knowing the fact that the person who was indulged in the violence and indecency with a woman in Lakhimpur Kheri was not of BJP but was a supporter of an independent party,” said Dinesh Sharma adding that “Akhilesh’s politics is always confined to Twitter far away from the realities and issues.”

Dr Sharma went on to say “In an exemplary action, the Circle Officer, SHO and three SIs of Pasgawa Police Station, Lakhimpur Kheri have been suspended while the accused Yash Verma and Brij Singh are arrested.”

The Deputy CM said that CM Yogi has already instructed to take stringent action on an immediate basis with a zero-tolerance policy and urged to conduct the Block Pramukh election peacefully.

Reacting to the incident, Sharma said that on the instructions of CM Yogi all the necessary actions by confiscating the weapons of those demonstrating arms and weapons have been taken.

Dr Sharma said that all the elections conducted during the regime of the Yogi Government were held with full transparency and fairness. The people of the state have seen the extremes of bullying and torment in the SP Government.

Stating that even after going away from power, SP leaders are not deterring from their antics, Sharma said, “Why does Akhilesh not understand that in BJP Government, anarchy, hooliganism, and criminals are sent to jails instead of getting protection.” (Inputs from UNI)

SC junks plea against continuity of caste-based reservation in education

Somy Ali recalls her brief meeting with late Dilip Kumar: He was the kindest person I have met during my time in India