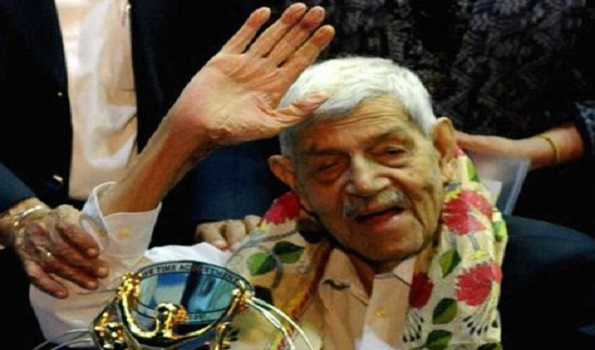 Wednesday, 7 July 2021 (14:13 IST)
Kolkata: Hockey legend Keshav Dutt, who was part of India’s historic winning feat at the 1948 Olympics where the country beat host Britain 4-0 at the Wembley Stadium in London to win the first gold post Independence, died early Wednesday due to old age.

Keshav Dutt, who donned Indian colours in the 1948 and 1952 Olympics and won gold medals for the country, and made Indians proud at a global level in field hockey on many occasions were 95.

The former centre halfback Keshav Dutt's end came around 12.30 a.m. at his Santoshpur residence in the southern part of the city in South 24 Parganas.


Keshav Chandra Dutt, born December 29, 1925, was a prolific hockey player of his time and had earned respect both from teammates and the rivals for his stick work.

Besides the sportspersons across the country and his followers in Kolkata, West Bengal chief minister Mamata Banerjee condoled the demise and said they have lost a legend.

"The world of hockey lost one of its true legends today," Ms Banerjee said.

"Saddened at the passing away of Keshav Dutt. He was a double Olympic gold medal winner, 1948 and 1952. A champion of India and Bengal. Condolences to his family and friends," Ms Banerjee tweeted.

Before the 1948 Olympics in London, Dutt had toured East Africa under the leadership of hockey wizard Major Dhyan Chand in 1947. Born in Lahore, Dutt was also part of the Indian team at the 1952 Helsinki Games, where they beat Netherlands 6-1 in the final to become the Olympic champions for the fifth consecutive time. (UNI)

Dilip Kumar last appeared on celluloid in 1998, These were the major hits