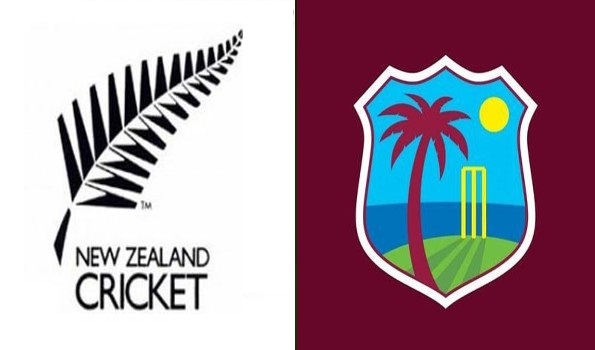 Friday, 27 November 2020 (15:56 IST)
Auckland: Auckland, Nov 27 (UNI) Kieron Pollard's blitz went in vain as Jimmy Neesham (48), Devon Conway (41) and Mitchell Santner (31) joined hands in the run-chase to give New Zealand a five-wicket win in the first T20I on Friday.
Chasing 176 in 16 overs, New Zealand were 63/4 at one point before debutant Conway and Neesham resurrected the innings with a rapid partnership of 77 in 35 balls.
Conway showed excellent composure amidst the quick wickets lost, while Neesham started off with a bang, hitting two fours off his first two balls. He went on to hammer 23 runs in a Kesrick Williams over to bring the required run-rate down.
Pollard's golden arm accounted for Conway, who made a handy 41 from 29 balls, but Neesham had company in the form of Santner, who started his innings with a six off the third ball he faced.
The duo were helped by an ill-disciplined over from Keemo Paul, who sent down four no-balls in a 14-run over that brought the equation down to 15 needed off 12 balls. Santner smoked a couple of sixes in the last two overs to seal the game for New Zealand with four balls to spare.
Earlier, New Zealand won the toss and opted to bowl first with all the rain around. The visitors began their innings on a positive note as Brandon King and Andre Fletcher smashed 55 runs in three overs in between rain breaks.
Few would have predicted what unfolded shortly after that. Ferguson, fresh off an IPL stint with Kolkata Knight Riders, picked up two wickets in his opening over before Tim Southee added two more in the next to reduce West Indies to 58/4.
After a promising partnership of 58 Kiwi pacer Lockie Ferguson scalped 5 wickets. Despite his brilliant bowling Kieron Pollard smashed all around the park and scored 78 runs in 37 balls (4*4, 6*8). (WD)

Pakistan and Westindies to play cricket at neutral venue, not UAE