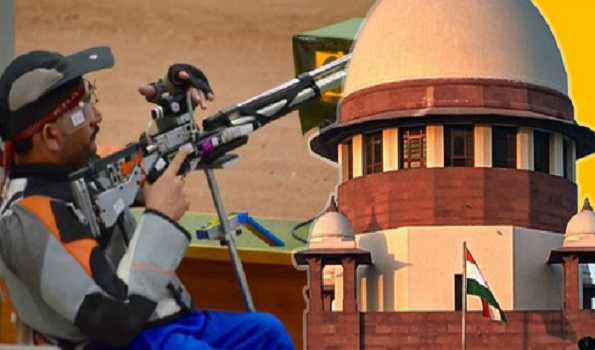 Monday, 2 August 2021 (19:04 IST)
New Delhi: The Supreme Court on Monday directed the Paralympic Committee of India (PCI) to include five-time Paralympian shooter Naresh Kumar Sharma as an additional participant in the 50 meter para-shooter event at the Tokyo Paralympics, which starts from August 24.

Earlier in the day, a bench of Chief Justice NV Ramana and Justice Surya Kant was hearing the petition of Sharma, an Arjuna Award winner, who has pointed out the delay in his plea before the Delhi High Court relating to his non-selection for the upcoming Tokyo games.

The Delhi High Court had posted his plea for hearing on August 6.

The Apex court took note of the submission of Sharma's lawyer Vikas Singh, who had stressed the urgency of the matter. Accordingly, a special bench comprising Justices AM Khanwilkar, BR Gavai, and Krishna Murari heard the plea in the afternoon.

As the last date for sending the names for the event is August 2, the bench directed the committee to add the name of Sharma in the R-7 shooting event and report compliance by Tuesday.

The Top court also asked the order to be emailed to the president of the Paralympics Committee.

The Sports Ministry said it had no objection if the name of Sharma is sent and it would be happy if medals increase. (UNI)