Alcazar becomes 10th Millionth car to be rolled out by Hyundai 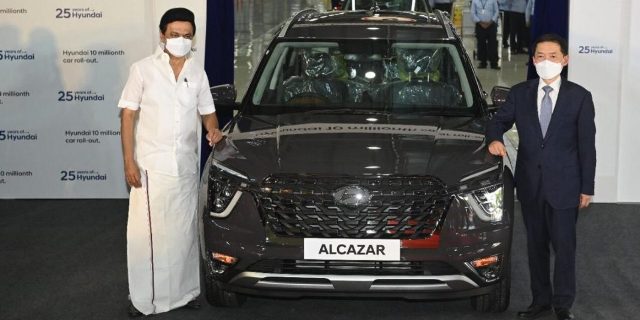 Wednesday, 30 June 2021 (16:42 IST)
Chennai:Passenger car makers Hyundai Motor India Limited (HMIL) today rolled out its 10 millionth car from its manufacturing plant at Sriperumbudur, about 40 km fom here. Hyundai' journey started 25 years ago with the roll out of Santro and its premium 6-7 seats SUV Hyundai Alcazar is the 10 millionth car to roll out of the production line.


Tamil Nadu Chief Minister M K Stalin signed on the car bonnet to mark the momentous occasion.The company reinstated its commitment of Make-in-India with the fastest roll out of 10 million cars from its state-of-art manufacturing facility in India near here.

The unparalleled milestone of achieving production of 10 million cars is a result of smart manufacturing and re-affirms Hyundai’s commitment towards making India Self Reliant.The achievement reiterates HMIL’s support towards State and Central Governments to accentuate economic recovery by overcoming the challenges posed by the Covid-19 pandemic.

Commenting on the occasion of the fastest 10 millionth car roll out,HMIL MD and CEO S S Kim said this historic milestone is a testimony of Hyundai’s commitment towards the Make in India initiative."Furthermore, it also showcases our vision of boosting the socio-economic development in the State and making the country more self-reliant. Inspired by our global vision of ‘Progress for Humanity’,

Hyundai has always brought positive change in the lives of its stakeholders and communities", he said.As the country’s largest exporter, Hyundai surpassed the three million vehicle export mark in early 2020, exporting to 88 countries and recorded multiple export milestones over the years--five lakh exports in March 2008, 10 lakh in February 2010 and 20 lakh
exports in March 2014.

Mr Kim said in pursuit towards realizing the dream of ‘Make in India’, Hyundai contributes to India's GDP by sustaining its position as India’s leading exporter of cars and exported 1,04,342 units of passenger vehicles from India between April 2020 and March 2021, continuing its journey as the leading automobile brand to export from the country.

Hyundai has been driving manufacturing excellence at its plant with an installed capacity of producing 7.5 lakh units annually. Supporting the government’s Make in India initiative, the company has manufactured over nine million cars at this facility. He said the company contributed to Indian economy with an investment of USD four billion, with over 15 000 workforce and launching products symbolizing epitome of manufacturing excellence.
To mark its 25th year, the company also announced community development programmes like inauguration of Dream Village Project 2.0–Construction of Child Care Centre benefitting 500 people annually and Community Hall with capacity to accommodate 1,500 people at Katrambakkam village in Sriperumbudur; launch of Income-Generation Programme (Dairy Farming) for rural women benefitting 200 families in Kancheepuram district; donation of five life-saving ventilators to Government Hospitals at Kancheepuram and support to a Self-Help Group for setting up a mobile catering service at Vallakottai village near Sriperumbudur.
Mr Stalin announced the social value initiatives and handed over the project
certificates to beneficiaries.(UNI)

Britney Spears pleads to court to end ‘abusive’ conservatorship; says father is not allowing her to a baby