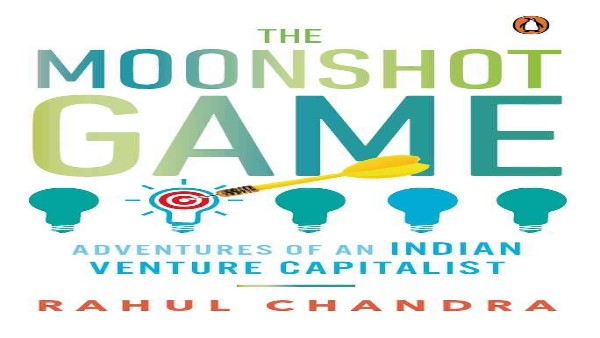 Monday, 11 November 2019 (18:04 IST)
India's start-up revolution kicked off in the late nineties (98).In a first venture capitalist (VCs) started arriving from the west and backed the business set up in IT services to assist global corporates. The second wave came after a gap of 8 years when the local VCs were able to raise large amounts of capital in order to fund products and services companies for Indian customers.
This is a captivating behind-the-scenes story of a VC's voyage to the success, right from the second start-up revolution in India in 2006 which bore fruit in 2016. This is a story about how global conditions, local consumers, founder’s ambition and good old greed all played as a contributor to lay the foundation of start-ups in India.
“The moonshot game: Adventures of an Indian venture capitalist” penned by Rahul Chandra, who is also a co-founder of Helion Ventures is an honest effort of the author to capture the diligence, outburst and Topsy turvy path of a venture capitalist. Rahul Chandra can best describe the story of Vijay Shekhar Sharma as both were on the same page.
Rahul Chandra takes us down his memory lane when he first met Vijay Shekhar Sharma a young entrepreneur in Delhi. Vijay was operating a Delhi based company located in Nehru Palace. The minor section of the company was owned by a private investor. The time was running out of Shekhar's hand till one of his banker friend advised him to go for Venture financing.
The author Rahul Chandra was impressed by the conviction of Vijay about owning a network of servers across telecom networks. The network will feed paid contents to the subscribers. He not only aspired to be the owner of the content but also to become the distributor of it. He had already noticed a gap between the operator and distributor that required to be abridged.
Impressed with his confidence and dialect, Chandra made a beeline of meeting with Vijay Shekhar Sharma. Chandra figured out that Vijay was least interested to take the creative risk and was inclined to have a coalition with content generation companies.
When Chandra had a visit to Vijay's workstation, it was not a typical swanky corporate office. As many as 75 employees, from writers to engineers were working under one roof to get the job done. Anything that can be read and listened was being produced across the genre.
Vijay approached like a skipper of a test match who plans to do well in session to win the test match. In a bid to achieve his short term goal, he worked tooth and nail to sign up MTNL.
That's not all, Chandra received positive feedback from top-notch executives of telecom operators which made his gut feeling about One97 more stronger. After brainstorming he decided to call Vijay for a formal introduction with Helion’s team.
Post powerful presentation by Vijay, Team Rahul Chandra was damn interested in One97 and Helion's alliance. It would have helped both to work constantly to deliver content to the rising subscriber base. But there was another twist in the story, Did Chandra changed his mind or Vijay had a better proposal from somewhere else.?
You will get all the answers and the minute details of each intriguing incidence of Vijay Shekhar Sharma's journey in the book "Moonshot Game: Adventures of an Indian venture capitalist."