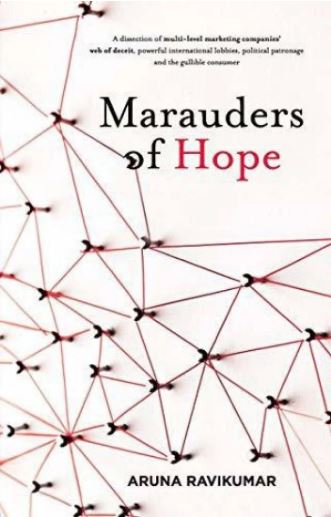 Wednesday, 4 September 2019 (14:36 IST)
:-Anil Mishra
Panaji: Multi-level marketing schemes which are prevalent in the country for over two decades use pyramid and ponzi schemes to con innocent people. These schemes are financial scams which target gullible people on the pretext of offering easy sources of income. Victims wake up too late enabling perpetrators of frauds to make huge profits at their expense.
'Marauders of Hope' penned by author and senior journalist Aruna Ravikumar is an eye-opener and must-read for all concerned citizens across the country. It dissects multi-level marketing scams, draws why they happened and unfolds remedial measures to stop the cancerous growth of dubious multinational corporations that were quick at feeding off people, hungry to make fast money. The book is about the unconcealed greed of companies and individuals who reap a rich harvest through fraudulent financial schemes that are a recipe for disaster. It is also about political patronage and failure of different regulatory and enforcement authorities to contain illegal forces.

What inspired the author to pen the book?

''I have been associated with the print and electronic media for over three decades now. I used to host a TV programme which stands for the truth. During that time, I realised that a number of people were duped of their hard earned money due to multi-level marketing scams. At one point of time there were various such scams taking place in Telangana and we thought it was time to discuss this issue threadbare. So I sent a representative from my company to meet up with some of the victims and source information. I found out there were many people who fall victims to pyramid and ponzi schemes. Many of them were women, housewives, students, illiterate and literate people, unemployed people, basically people across the spectrum. It was mainly a betrayal of trust and that's the reason why I call this book Marauders of Hope,'' she told UNI in an interview.

''It's a book written with a social conscience. Rather than saying I chose the subject, I would say that the subject chose me. I was drawn to it because of the ruined relationships, the impact it had on society and why people felt so miserable. They felt miserable not only because they lost their hard earned money but because they were cheated by somebody and no one likes to be cheated on, especially by a close friend or family. That's what drew me to the subject. So I decided to tell this story which is not an easy one,'' she said.

But the job was not easy as it took a lot of research and fact-seeking.

''I conducted extensive research spanning about a year and half. At one level it was easy because I was a journalist so I already knew many people, but at another level I had to speak to a lot of people about their experiences. I also had to go through a lot of online material. I met and spoke at length with victims, influencers, whistle-blowers and company officials. I spoke to people who've acted upon these cases such as officers, NGOs and civic rights groups who have tried to stand up against such frauds. I've written a chapter in the book based on my discussions with people who are trying to fight this issue.  I also needed to learn how these companies operated. I had to learn about the various schemes. As a journalist I'm used to reading between the lines, so it was easy, but otherwise, I had to put in a lot of hard work,'' Ms Ms Aruna said.
When asked where did the problm lie and why people were getting conned in spite of efforts of Reserve Bank of India (RBI), the author said  such companies were actually illegal under the Prize Chits and Money Circulation Schemes (Banning) Act (PCMCS) but had been present for almost 20 years and so no one questioned their legitimacy.

''What bothers me most is that people talk about Vijay Mallya but no much is talking about these scams which affect millions. MLM scams have been happening in India for over 20 years and the total loot amounts to close to seven lakh crore,'' she said.

Is regulatory framework weak or there is lack of proper enforcement?  Is it due to absence of financial literacy in the country?

Ms Aruna said,''We have a government that talks about a new India and an empowered India. India which is actively fighting corruption. So I would like the government to act. We have a wonderful piece of legislation, the PCMCS act, 1978, to take such companies to task. We have laws in place but they aren't being implemented. The 16 agencies present in our country that can regulate this act are not doing anything. They pass it on to someone else saying it doesn't come under their jurisdiction. Recently, the Cyberabad Police in Hyderabad have registered 38 cases and arrested 70 people in a multi-level marketing scam allegedly involving Q-Net. The company had roped several celebrities to endorse their services.''

''This book is hoping to tell the government to act on the issues and bring a solution because this is a worldwide phenomenon. The only agency which can crack down of these fraudulent companies is the government,'' she said.

About her expectations from the book, she said,''It's a book written with a social conscience. Rather than saying I chose the subject, I would say that the subject chose me. I was drawn to it because of the ruined relationships, the impact it had on society and why people felt so miserable. They felt miserable not only because they lost their hard owned money but because they were cheated somebody and no one likes to be cheated on, especially by a close friend or family. That's what drew me to the subject. So I decided to tell this story which is not an easy one.
Most of such companies entered India post liberation and set up shop here. They started operating Ponzi schemes that were based on recruitment and enrollment on people and that's how they get commissions.  These schemes are a mathematical improbability. Only the people at the top of the pyramid make money. As the pyramid keeps growing most of the people lower down in the pyramid don't make any money. Also, the main heads of these companies are mostly not in the country and hence not governed by the laws of India.''

''Over the years, the MLM companies have inspired local companies and the locals, make their own version with the given ideas and they continue to scam people. All the money comes from enrollment and the products are just a cover,'' she added. The book is published by 'The Write place', a publishing initiative by Crossword Bookstores. (UNI)

Tinka Tinka Tihar: Poems by Inmates of Tihar to be released in Pune jail