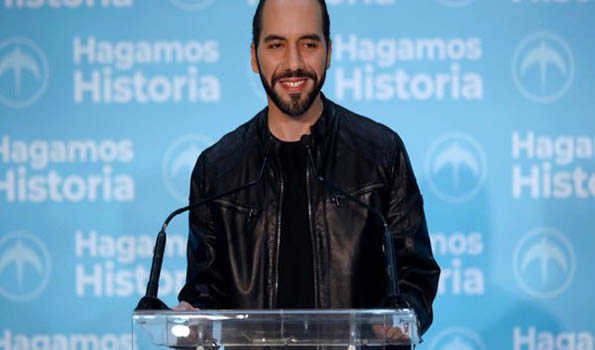 Tuesday, 8 June 2021 (15:39 IST)
El Salvador's President Nayib Bukele announced that the country is to adopt Bitcoin as legal tender in a broadcast at the Bitcoin 2021 conference in Miami, Florida on Saturday. A day later he unveiled on Twitter the benefits for investors resulting from the move.

Why does the president want this?

Accepting Bitcoin as legal tender would make it easier for the more than 1.5 million Salvadorans living outside of the country to send money back to their home country.

A low-income nation and the smallest country in Central America, El Salvador had a gross domestic product (GDP) just below $25 billion (€21 billion) in 2020, according to the International Monetary Fund. A study by the Pew Research Center says that nearly 20% of the country's GDP comes from remittances, money sent home by Salvadorans living abroad. This requires the use of money transfer services, which often charge high fees. Payments can take days to go through. Bitcoin transfers avoid both of these problems.

The scheme would also allow El Salvador to capture some of the massive revenue circulating on the Bitcoin network, Bukele said.

"If 1% of it is invested in El Salvador, that would increase our GDP by 25%," he wrote on Twitter on Saturday.

Bitcoin has a current market capitalization of $684 billion, according to cryptoassets price tracker CoinMarketCap.

A young and popular president, the move also reinforces Bukele's image as a bold and digitally savvy leader.

How would it work?

Bukele provided few details about how the plan would work but said he would send a bill proposing the move to Congress this week. Congress would then have to pass the bill in order to make El Salvador the first country in the world to accept Bitcoin as legal tender. Bukele's New Ideas party currently controls El Salvador's Legislative Assembly, so passage is likely. Bitcoin would be recognized alongside El Salvador's official currency, the US dollar.

The rollout would be handled by the mobile payments app Strike, which recently debuted in El Salvador.

"What's transformative here is that Bitcoin is both the greatest reserve asset ever created and a superior monetary network," Strike founder Jack Mallers said on Saturday. "Holding bitcoin provides a way to protect developing economies from potential shocks of fiat currency inflation."

Bukele argues that some 70% of people in El Salvador do not have a traditional bank account, so the idea is that they could instead go online and create digital Bitcoin wallets, which they would use to send, receive and spend Bitcoin.

No national government currently recognizes Bitcoin as legal tender, but there are still a few ways to spend it: Holders of the cryptocurrency can exchange it between themselves via digital wallets that store their Bitcoin. They can use a third-party service to convert it into a government-issued currency, like the US dollar. And more and more companies, including payment service PayPal, have started or plan to start accepting Bitcoin as payment.

Is it a good idea?

Bitcoin has some properties that make it well suited to the financial landscape in El Salvador and other countries whose economies rely on remittance payments from abroad. For one, money can be transferred on Bitcoin's network instantaneously, at little or no cost.

However, the country would also need the financial infrastructure in place to make it possible for people to easily buy goods and services with Bitcoin.

The cryptocurrency's value remains volatile. This makes it unsuitable as legal tender people can rely on to pay for necessities like food and rent. The value of Bitcoin has fallen by more than $25,000 since hitting highs of nearly $65,000 earlier this year.

Despite these fluctuations, Bitcoin is still up compared to this time last year, which begs the question whether people will be willing to spend the crypto in the first place. Thus far, it has functioned more like a financial asset akin to gold than a currency meant to be spent on commonplace items.

Bitcoin's decentralized system makes it vulnerable to such spikes and falls, qualities that financial regulators are keen to avoid, lest they wreak havoc on the global financial system. Bitcoin is not backed by any asset or government.

What does this mean for Bitcoin?

The announcement is the latest and arguably largest institutional win for Bitcoin following months of increasing mainstream recognition.

While many of the world's central banks have said they are working on digital currencies of their own designed to work alongside traditional currencies, El Salvador's proposal to work with an existing cryptocurrency is novel.

The move is likely to further cement Bitcoin's position in the global financial landscape. At the same time, going through with such a move would be the greatest real-world test to date of Bitcoin's viability as a large-scale method of payment. How well it works for El Salvador is sure to have global repercussions for the cryptocurrency, for better or for worse.

High Profile Twitter accounts in the US hacked in Bitcoin Scam