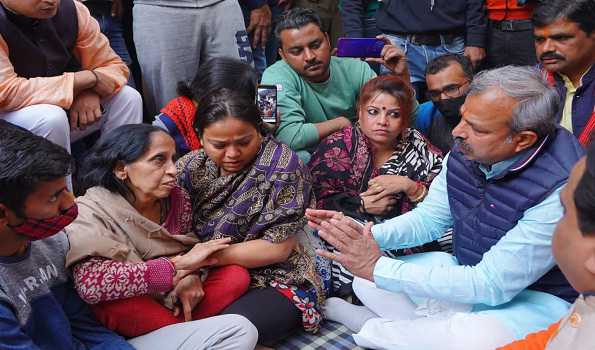 Saturday, 13 February 2021 (10:41 IST)
Delhi police said Rinku Sharma was killed in a quarrel at a birthday party, where the guests were all acquainted. But right-wing BJP supporters claim it was a hate crime.The killing of Rinku Sharma, a 25-year-old man in Delhi, stirred a controversy that spilled on to social media on Friday. Sharma was stabbed to death after a quarrel at a birthday party in outer Delhi's Mangolapuri area, police said on Friday. But there were varying reasons given for the cause of the altercation.
Outer Delhi police said on Twitter that authorities arrested four men who were allegedly
involved in the quarrel, which took place on Wednesday. The accused have been identified as Mohammad Danish (36), Mohammad Islam (45), Zahid (26) and Mohammad Mehtab (20), police said.
"All persons are known to each other and live in the same locality. Any other motive alluded to this incident is factually wrong," police said.
The stabbing stirred outrage on Twitter, as people mourned Sharma, while others questioned the police statement.
Twitter users mourn Sharma
People on Twitter have mourned Sharma's death through posts, cartoons, prayers and donations.
Twitter users circulated a donation campaign to support Sharma's killing. "Rinku Sharma was [the] sole breadwinner of his family," one user said, asking followers to contribute.
Other users demanded justice for Sharma, as the hashtag #JusticeForRinkuSharma trended on Twitter.
The killing sparks outrage
Members and supporters of Prime Minister Narendra Modi's right-wing Bharatiya Janata Party (BJP) took to Twitter to denounce the killing of Sharma, as they rushed to describe the murderers as "Islamist" committing a sectarian crime.
Many tweets claimed that Delhi's police were covering up on a hate crime, saying that the killers attacked Sharma in his house. Some even used the hashtag "#HindusLivesMatter," alluding to the Black Lives Matter movement that addressed racial discrimination in the United States.
Bollywood actress Kangana Ranaut also piled on the sectarianism allegations.
"Look at this young man and his innocent eyes full of devotion, faith and glowing dreams for his future. He did not insult anybody's god, his crime was he loved and worshiped his own Ram ... This is secular India," Ranaut said, sharing a photo of Sharma and one, allegedly, of the knife that the murderers used to stab him.
Some Twitter users also claimed that the killers attacked Sharma because he was involved in raising donations to renovate a Hindu temple.
Tensions rise between Hindus and Muslims
With India's diverse religious demographic, this is not the first incident that brings up sectarian accusations.
Tensions have increased between Hindus and Muslims since the government passed the Citizenship Amendment Act (CAA) in December 2019. A law that excludes Muslims and comes amid an upsurge in Hindu-nationalist politics.
In 2002, a train carrying Hindu pilgrims was set on fire in Godhra, in India's western state of Gujarat. Muslims were held responsible for the incident that killed more than a thousand people. Hindus comprise the majority of Delhi's demographic, with over 80% of the population.

Women protest in Kathmandu against violence

Delhi temp likely to dip to 3 degrees, no relief from cold wave