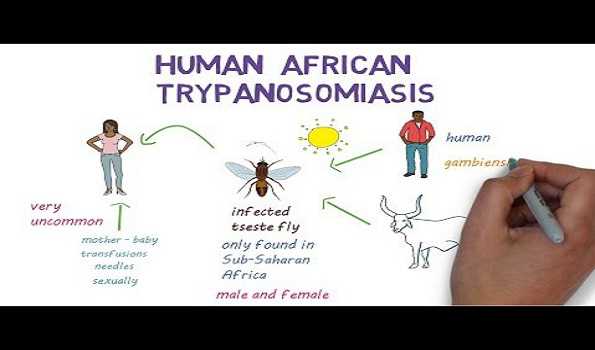 Friday, 9 February 2018 (13:01 IST)
Kolkata: Human African trypanosomiasis, also known as sleeping sickness, is a vector-borne parasitic disease. It is caused by infection with protozoan parasites belonging to the genus Trypanosoma.


They are transmitted to humans by tsetse fly (Glossina genus) bites which have acquired
their infection from human beings or from animals harbouring human pathogenic parasites.
Tsetse flies are found just in sub-Saharan Africa though only certain species transmit the disease. For reasons that are so far unexplained, in many regions where tsetse flies are found, sleeping sickness is not.

Rural populations living in regions where transmission occurs and which depend on agriculture, fishing, animal husbandry or hunting are the most exposed to the tsetse fly and therefore to the disease. The disease develops in areas ranging from a single village to an entire region. Within an infected area, the intensity of the disease can vary from one village to the next.
Human African trypanosomiasis takes 2 forms, depending on the parasite involved: Trypanosoma brucei gambiense is found in 24 countries in west and central Africa. This form currently accounts for 97 per cent of reported cases of sleeping sickness and causes a chronic infection. A person can be infected for months or even years without major signs or symptoms of the disease. When more evident symptoms emerge, the patient is often already in an advanced disease stage where the central nervous system is affected.

Trypanosoma brucei rhodesiense is found in 13 countries in eastern and southern Africa. Nowadays, this form represents under 3 per cent of reported cases and causes an acute infection. First signs and symptoms are observed a few months or weeks after infection.The
disease develops rapidly and invades the central nervous system. Only Uganda presents both forms of the disease, but in separate zones.
Another form of trypanosomiasis occurs mainly in Latin America. It is known as American trypanosomiasis or Chagas disease. The causal organism belongs to a different Trypanosoma subgenus and is transmitted by a different vector.
Other parasite species and sub-species of the Trypanosoma genus are pathogenic to animals
and cause animal trypanosomiasis in wild and domestic animals. In cattle the disease is called Nagana. Trypanosomiasis in domestic animals, particularly in cattle, is a major obstacle to the economic development of affected rural areas. (UNI)

7 things only a sleep-ready person will understand