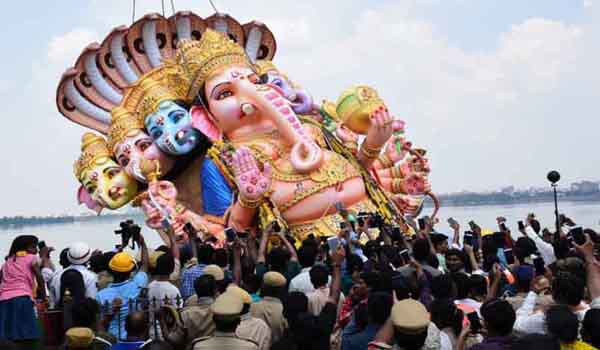 Friday, 25 June 2021 (21:29 IST)
Panaji: Hindu Janajagruti Samiti (HJS) has appealed Goa Chief Minister Pramod Sawant through memorandum to completely ban sale of PoP Ganesh idols and form a task force to strictly implement the ban during Ganesh festival of 2021.
In a memorandum, the HJS said,''This year, Sree Ganesh Chaturthi is going to be celebrated on the 10th September. In spite of the persistent yearly ban, every year PoP idols are available for sale in many parts of the State before Ganesh festival. Also it is found that PoP idols with outer finishing of clay are also sold in the market. It has been observed that these idols float in water after immersion. This amounts to extreme denigration of the deity. The deity should be offered the same reverence when immersing it as when it is invoked.''

''Mixing of the plaster of Paris in water pollutes the river, sea, lake, etc. and can have an adverse effect on the health of living beings. Government should impose a complete ban on the sale of PoP Ganesh idols and also should encourage idols made of Shadu clay in order to enable the worshipper to obtain maximum spiritual benefit and blessings of the deity. PoP idols with outer finishing of clay should also be banned in the state.

''The government should ensure that enough Shadu clay is available in the state for making Ganesh idols of Shadu clay. The government should ensure that Sree Ganesh idols made of paper pulp which are against the science of spirituality are not sold in the state,'' Dr Manoj Solanki, State Convener, Hindu Janajagruti Samiti.(UNI)