Once jam-packed, Tirumala Hills now have become barren due to COVID-19 (Pics) 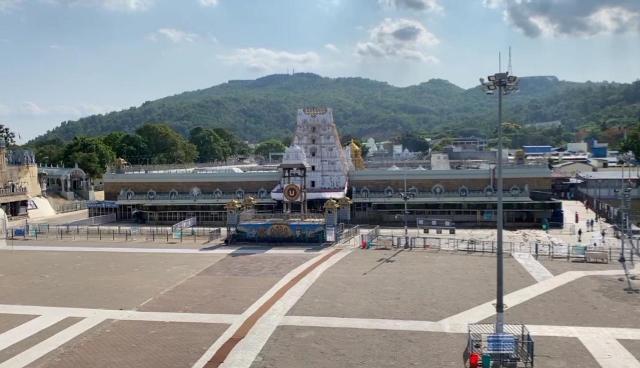 Needless to say, the world-famous Tirumala is crowded with devotees. With the arrival of lakhs of devotees on a daily basis, the hills of Tirumala are transformed with the naming of Govinda. That is before corona entry.

This is the first time in the history of TTD that devotees have distanced themselves from lord Balaji. However the first wave subsided. The second wave began at a time when we no longer thought we were recovering from the corona. Corona cases have been on the rise since early March.
The number of cases gradually increased during the month of April. The death toll in May month has risen unexpectedly. From the beginning of this month, the onslaught of devotees in Tirumala has been greatly reduced.

Tokens for Srivari Darshan have been discontinued over the counter since the 15th of last month. Tokens were issued at the Vishnu Niwas and Bhudevi complexes in Tirupati. But with more and more devotees coming to Tirupati from Maharashtra and Karnataka as the number of corona cases in the state was registered high. TTD was immediately alerted and taken actions.
TTD has Stopped Darshan tokens offline to reduce spreading. TTD has been providing 15,000 tokens every day in the past through offline. However, 25,000 tokens were available to devotees online. However those tokens also started to shrink. Stopped giving out 10,000 tokens online. With this, devotees could get only 15,000 tokens online by paying Rs 300.

But in two places in Tirupati and Tirumala, there were corona cases like nowhere else in the state and there was concern among the devotees. All the devotees have booked the tokens which were released online last month. But none of the devotees who booked the tokens came to the darshan.
Gradually the number of devotees visiting Tirumala is declining. Initially 10 thousand, then 8 thousand, 6 thousand, 4 thousand, now close to 3 thousand. The TTD concept is that there have never been situations where the Tirumala has been visited in the past at this level.

Tirumala small shops businesses have completely collapsed. Owners are afraid to open shops due to the fear with the corona virus.Every place that was always buzzing with people now looks empty.
At present the corona cases not going in declining condition. If the second wave is frightening, then the propaganda that the third wave is coming will frighten the devotees even more.

Deaths from long working hours on the rise, says WHO