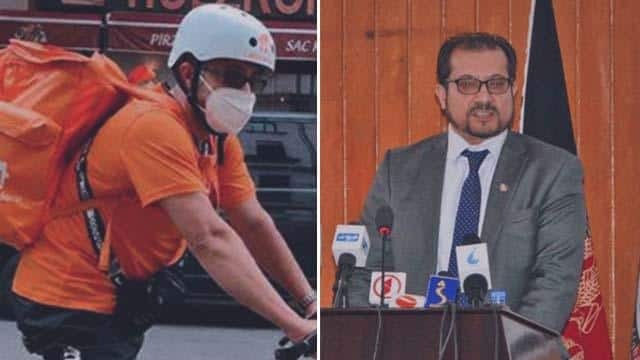 Wednesday, 25 August 2021 (14:36 IST)
Syed Ahmad Shah Sadat, the former Afghan Minister of Communications and Technology, is now working as a pizza delivery man in the German city of Leipzig.

Recently, photos of Syed Ahmad Shah Sadat delivering pizza on his bicycle in Leipzig went viral on social media. Some of the photos are posted by Al Jazeera Arabia.

Syed Ahmed Sadat, the former Afghan Minister of Communications and Technology, has taken up the profession of delivering food orders on a bicycle in Leipzig, Germany, where he arrived at the end of 2020 after resigning from his position. https://t.co/CtaFvRSTBa


Sadat joined Ashraf Ghani's cabinet in 2018, but resigned from his post in 2020 due to differences with him. He subsequently left Afghanistan and went to Germany.

According to Sky News, Sadat told them that he started working as a food delivery man for German company Livrando after his money ran out.

According to some media reports, Sadat holds two master's degrees in communications and electronic engineering from Oxford University.