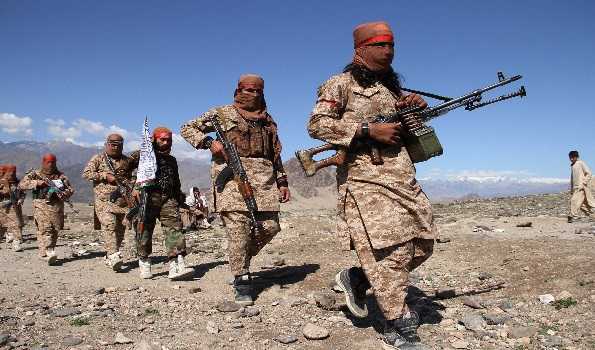 Wednesday, 1 September 2021 (22:27 IST)
Kabul: Fighting intensified between the Resistance forces led by Ahmad Massoud and the Taliban in Panjshir, with the Taliban reportedly suffering heavy casualties as they tried to surround the mountainous region in northeastern Afghanistan, the only province the Islamist group has not been able to capture.

Massoud, the son of late Afghan leader Ahmad Shah Massoud, who is leading a several thousand-strong Resistance force in Panjshir, has refused to bow to the Taliban.

“Death is better than life in humiliation," he said in a tweet on Wednesday.

Meanwhile, Taliban leader Amir Khan Mottaqi said in an audiotape that talks with the Panjshir Front had failed and that Taliban forces had surrounded the province.

But resistance leaders from Panjshir refuted the Taliban claim.

“Don't believe the propaganda of enemies! All the attacks from six sides in Panjshir were successfully defended by the NRF (National Resistance Front). The Taliban casualties are so catastrophic that they cannot take all the bodies that are lying around the border areas of the province.

“They have modern weapons but dumb minds,” said one Resistance force leader from Panjshir.

According to Afghan media, Amrullah Saleh, the caretaker President of Afghanistan, who has joined forces with Massoud, has told the Taliban that “Governing Afghanistan is not possible with a handful of illiterates”.

Fahim Dashty, spokesperson of Ahmad Massoud’s resistance forces, said in an audio tape that the Taliban "has not advanced a kilometer" in Panjshir.

“On the top. Waiting for the enemy. Our guns and our soldiers are ready to hunt whoever dares to enter the Panjshir Valley,” Resistance forces tweeted.

As the Taliban send its fighters to encircle Panjshir, NRF, which includes anti-Taliban militia fighters and former Afghan security officers, has vowed to protect the enclave.

According to pro-Resistance social media accounts, at least six resistance fighters were killed in the fight against Taliban over the last 24 hours.

The Taliban are reportedly trying to enter Panjshir through the Gulbahar pass route, but the Resistance forces hit them from atop mountains, leading to heavy casualties. (UNI)