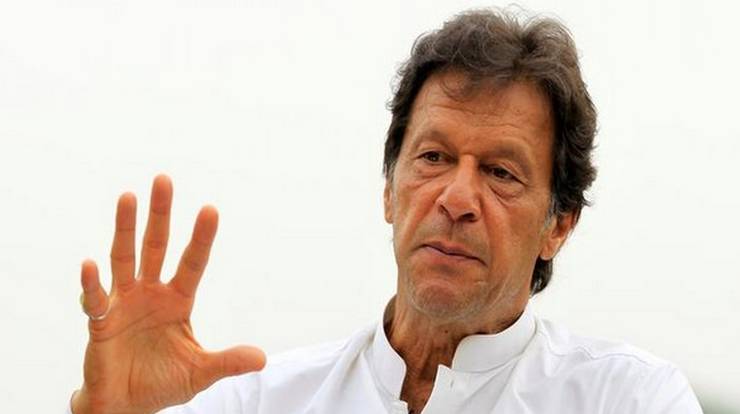 Thursday, 29 July 2021 (15:55 IST)
Islamabad: Pakistan Prime Minister Imran Khan on Thursday said Islamabad cannot be held "responsible" for the actions of the Taliban in the aftermath of US withdrawal from Afghanistan and neither is his government the militant group's spokesperson.

"What the Taliban are doing or are not doing has nothing to do with us. We are not responsible, neither are we the spokesperson of the Taliban," said Imran Khan, while speaking to a group of Afghan journalists in Islamabad.

He reiterated that Islamabad wants only peace in Afghanistan.


Imran Khan’s statement comes in the wake of his repeated warnings that Pakistan will not accept the responsibility if it is blamed for any deterioration in the Afghan peace process.

Asked about India, Khan said Pakistan would not accept Indian participation in the Afghan peace process till New Delhi reverts its “illegal decisions of August 5, 2019”, referring to Kashmir.

"Pakistan has always desired for peace with India, but it was India which did not want peace because it was at present under the influence of RSS ideology," he said, the Tribune.pk reported.

He said that Afghans had a choice to make: to either pursue the US-backed military solution or pursue a political settlement where there is an inclusive government. "[The latter] is the only solution," he said.

"There are three million Afghan refugees in Pakistan, almost all of them are Pashtuns and most will have sympathies with the Taliban. How is Pakistan supposed to check who is going over there to fight when we have about 30,000 people crossing into Afghanistan every day. How is Pakistan going to check that?"

He said it was not possible for Pakistan to sift through the refugee camps to find out who was pro-Taliban and who was not, adding that until recently there was no physical border between the two countries.

"The Durand Line was imaginary," he said, referring to the 2,640-km-long border between Afghanistan and Pakistan. He said that Pakistan has completed 90 per cent of the border fencing.

"We are trying our best, but it is not possible to hold Pakistan responsible when you have over three million refugees here."

Imran said Pakistan was ready and willing to do anything necessary for a peaceful settlement of the Afghan issue but ruled out using force against the Taliban.

“We believe that Afghanistan cannot be controlled from the outside. Our policy is to have the best relationship with whoever the people of Afghanistan choose," said the Pakistan PM.

Imran further said it was unfortunate that Pakistan was being blamed for the Afghan crisis as it was Pakistan that convinced the Taliban to come to the negotiation table.

“What interest would Pakistan possibly have for a civil war in Afghanistan? We would do everything short of military action against the Taliban as doing so would only drag Pakistan into a conflict."

Regarding the provision of military bases to the US in Pakistan, Imran Khan asked what could the US possibly achieve from operating out of Pakistan which they could not achieve by operating in Afghanistan for two decades.

“It was a flawed strategy. They should have talked to the Taliban from a position of strength when there were 150,000 NATO soldiers present in Afghanistan. There is no reason for the US to operate from Pakistan,” he asserted reiterating that it would only drag Pakistan into a conflict.

“Unfortunately, the account of the ambassador’s daughter does not tally with what she said about where she was taken and beaten up. We have analysed the footage and the police have also interrogated all three taxi drivers. She could be seen sitting perfectly fine where she said she was beaten,” Imran said.

'We cannot question the ambassador or her daughter as the envoy and his family returned to Afghanistan, but the footage would be handed over to the Afghan delegation so that they could ask them,' he added. (UNI)

Taliban claim control of some 90% of Afghanistan's border areas