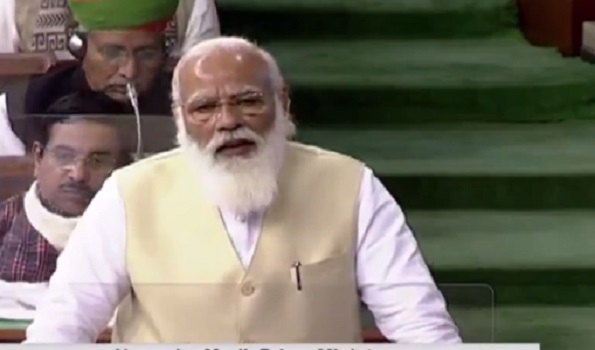 Wednesday, 10 February 2021 (20:03 IST)
New Delhi: Asserting that new farm laws were necessary to meet the challenges in agriculture sector, Prime Minister Narendra Modi said on Wednesday that his government and Parliament respects farmers and reiterated his offer of holding talks across the table with protesting farmers to find solutions to their problems.

Replying to the discussion in the Lok Sabha on the Motion of Thanks on the President’s address, Mr Modi said that he considered ‘Kisan Andolan’ to be sacred. “But when ‘Andolanjeevis’ hijack ‘Pavitra Andolan”, showcase photos of those jailed for serious offences like terrorism, does it serve any purpose? Not allowing toll plazas to function, destroying telecom towers, does it serve a Pavitra Andolan”. It is important for the country to differentiate between Andolanjeevis and Andolankaris,” he said.

His address was interrupted by noisy and angry opposition members who erupted in protests when he mentioned the farm laws. Congress floor leader Adhir Ranjan frequently interrupted him, prompting the Prime Minister who remained calm to observe that interruption and noisy disruption had gone on too long.

The Congress walked out soon after Mr Modi charged that the slogan shouting was part of a “planned strategy to drown the reason, facts and conceal the truth.” Members of the Trinamool Congress also staged the walk out in protest.

As the Speaker Om Birla repeatedly requested the members to calm down and maintain decorum, the Prime Minister said, “the farm laws will not bring down any farmer. No mandi has been shut or Minimum Support Prices have been stopped.” He said the farm laws were not compulsory but optional and offered alternative choices to the farmers to sell their produce anywhere at better prices.

“In fact, Minimum Support Prices have been increased after the farm laws were introduced,” he said while admitting that any effort to change the status-quo will always raise doubts.

The Prime Minister said the country cannot meet challenges of agriculture sector in 21st century with thinking of 18th century. “We will have to change it. Nobody wants farmers to stay stuck in cycle of poverty, that he does not get right to live. I believe he should not be dependent on others. It’s our responsibility,” he said.

Taking on the argument that nobody demanded new farm laws, Mr Modi listed a whole lot of social legislations like triple talaq, anti-dowry law and child marriage for which no requests were made but said that it was the responsibility of an elected government to make efforts towards building a progressive and dynamic society.