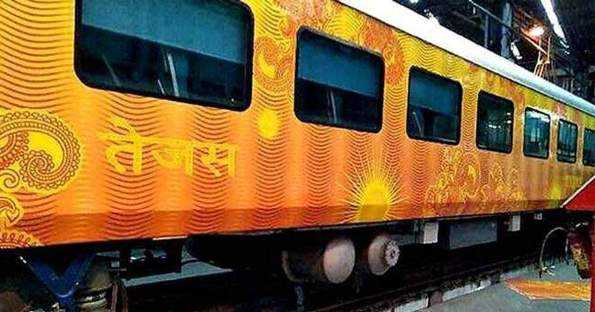 Monday, 16 October 2017 (11:01 IST)
Mumbai: At least 24 rail passengers were hospitalised due to food poisoning on Sunday after consuming breakfast served on-board Tejas Express between Goa and Mumbai. “A case of food poisoning was reported on train no. 22120 Tejas Express upon information from passengers.
The train was stopped out of course at Chiplun railway station and treatment was given to passengers by railway doctor,” the Indian Railway Catering and Tourism Corporation (IRCTC) said in an official statement. It added that 24 passengers were admitted at Lifecare Hospital in Chiplun, Maharashtra, where they were undergoing medical treatment. An IRCTC spokesperson said that all the hospitalised passengers were out of danger. The IRCTC had licensed the catering services to J.K. Ghosh company for providing meals on-board Tejas Express.

Passengers felt uneasy after having their breakfast meal that was served to 220 passengers – 170 vegetarian and 130 non-vegetarian meals, an IRCTC official said. “Most of the hospitalised passengers had consumed omelette in breakfast,” said an IRCTC official. The Indian Railways have sent the food sample for inspection. Tejas Express is the country’s first semi-high speed, fully AC train service launched between Karmali railway station in Goa and Mumbai’s Chhatrapati Shivaji Terminus Terminal in June this year. The maiden Tejas Express train service that was launched on this route had modern amenities such as automatic doors, LED TV, USB charging points, GPS-based passenger information system, celebrity chef menu and coffee vending machine, among others. (UNI)

Shaktipunj express derails in UP: No casualty