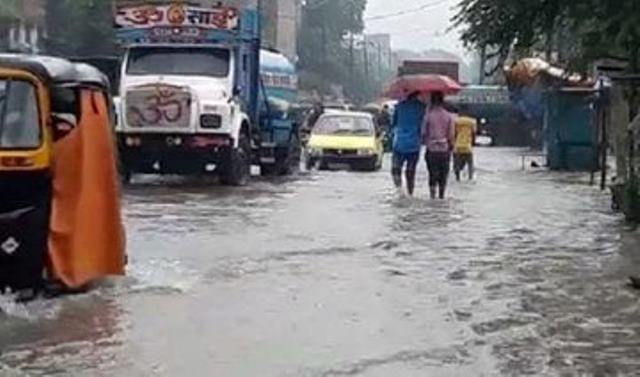 Thursday, 22 July 2021 (20:44 IST)
Mumbai:Maharashtra CM Uddhav Thackeray on Thursday took stock of the flood situation in Ratnagiri and Raigad districts, created due to torrential rains in the last 24 hours.

The IMD has warned of heavy rains in the Konkan coast for the next three days and issued respective red and orange alerts according to the regions.
Mr Thackeray appealed to the people living in these areas to be vigilant and cooperate with the administration as the river level is constantly rising.
He said that all the agencies should work carefully and cautiously taking into account the following warnings. Alternative arrangements should be made where there are COVID patients,he added.
Chief Secretary Sitaram Kunte informed that NDRF units, local police and fire brigade personnel, coast guard personnel are working with the help of local citizens.
As several rivers in both the districts are overflowing, the government agencies have started moving, evacuating and other relief work.
The Tilari project in Sindhudurg district is also flooded due to heavy rains whereas the Bhatsa and dam Surya dam have reached 63 per cent of their capacities.
Similarly, the Barbi and Morbe dams levels have surged to 62 per cent 71 per cent, respectively. The citizens of the area have been advised to be vigilant as the gates of the dams are likely to open at any time.
The meeting was attended by Principal Secretary Relief and Rehabilitation Asim Gupta, Principal Secretary Beneficiary Ajay Kohirkar, Vijay Gautam, Additional Chief Secretary to the Chief Minister Ashish Kumar Singh, Principal Secretary Vikas Kharge, Konkan Division Water Resources Chief Engineer Shri Tirmanwar and others.

Maharashtra | Parts of Ratnagiri district partially submerged in water due to heavy rainfall.

Maha: IMD issues flash flood warning  for Vidarbh
The next 36 hours are crucial for the Vidarbha region of Maharashtra as a flash flood warning has been issued by the Indian Meteorological Department (IMD).
As per the IMD prediction, moderate to high risk over few watersheds and neighbourhoods of Konkan and Goa, Coastal Karnataka, Coastal Andhra Pradesh, Telangana, Vidarbha, Marathwada, West Madhya Pradesh and East Madhya Pradesh met subdivision.
Surface runoff/Inunadation may occur at some fully saturated watersheds and low-lying areas due to expected persistent rainfall in the next 36 hours.
Earlier today, Regional Meteorological Centre Nagpur issued a yellow alert for Nagpur city which was soon updated to Orange alert as Nagpur may receive heavy to very heavy rainfall.
It is pertinent to mention that Nagpur on July 21 received 41.8 mm rain till 1:10 pm. Thunderstorm with lightning & light to moderate rainfall very likely to occur at many places over Nagpur, Wardha, Chandrapur, Gadchiroli, Yavatmal, Akola Amravati, Buldhana districts and at isolated places over Gondia and Bhandara districts of Vidarbh region of Maharashtra.(UNI)