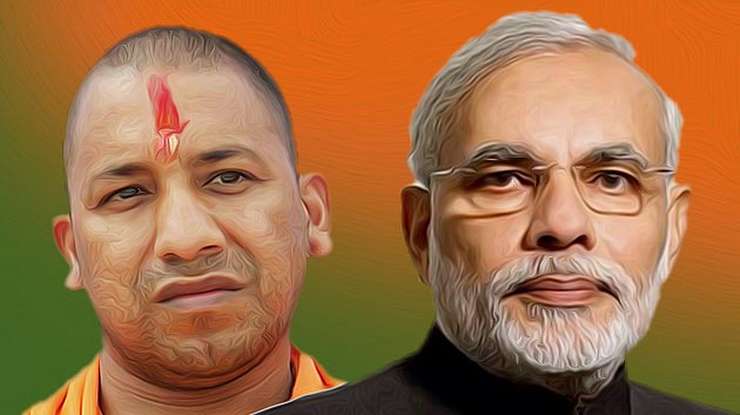 Tuesday, 13 July 2021 (22:48 IST)
Varanasi: In view of the proposed visit of the Prime Minister Narendra Modi to his parliamentary constituency on July 15, the Chief Minister Yogi Adityanath made a surprise visit here on Tuesday to take stock of all the arrangements.

It was the second visit of the CM in the city within a week and during his stay, he not only inspected the site at IIT-BHU ground where Modi will address a public meeting of selected people but also visited Kashi Vishwanath temple where he offered prayer and went through the Corridor construction site.
Yogi also offered prayer at adjoining Annapurna temple and expressed his condolences to Mahant Rameshwarpuri. He also offered floral tributes at the portrait of Mahant Rameshwarpuri.
During his visit to Banaras Hindu University (BHU) campus, the CM minutely inspected the arrangements at Techno-Pavilion Ground of IIT-BHU. He gave several instructions to the officers in view of making the security and other arrangements fool-proof there. He asked the Divisional Commissioner (DC) and District Magistrate (DM) that in case of rain, proper arrangements should be made so that there should be no water-logging. He also told the officers that proper sitting arrangements should be made there.
During his stay there, the CM saw all the corners of the ground and gave several instructions to the officers. Then he visited the MCH Wing at BHU and gave some instructions to the officers. After this, the CM once again inspected Rudraksh Convention Centre built with the cost of Rs 186 crore with the support of Japan. He said that it is a unique building where the combined architecture of Indian and Japanese structural art is clearly visible.
Later, the CM also held a meeting with the officers at Circuit House and sought all the details of arrangements. He said that not a single error should be left in preparations. He told the officers to ensure fool-proof security arrangements during the stay of the PM. He said that at the public meeting site proper arrangements of drinking water should be made and all the invitees should be checked with thermal scanners and pulse oximeters in view to ensure maintaining Covid-free atmosphere at all the venues. Yogi said that during road movement such arrangements should be made so that the people cannot face any inconveniences and at all the sensitive places the cops in civil uniforms should be posted.
The meeting was also attended by the UP Minister for Urban Development and Minister--in-Charge of the district Ashutosh Tandon, Ministers of State (Independent Charge) Neelkanth Tiwari and Ravindra Jaiswal, MLAs Saurabh Srivastava and Awadesh Singh, Mayor Mridula Jaiswal, Divisional Commissioner (DC) Deepak Agrawal, Commissioner of Police (CP) A Satish Ganesh, District Magistrate (DM) Kaushal Raj Sharma and many other senior district and police officers.
Meanwhile, officials have released the programme of PM’s visit. As per the schedule, the PM will inaugurate and lay foundation stones of various development projects at BHU Ground at 11.00 am while at 12.20 pm, he will inaugurate 'Rudraksh' International cooperation and convention centre near Sigra and at 2.00 pm the PM will inspect Maternal and Child Health (MCH) Wing, BHU and interact with the officials and medical professionals on Covid preparedness.(UNI)