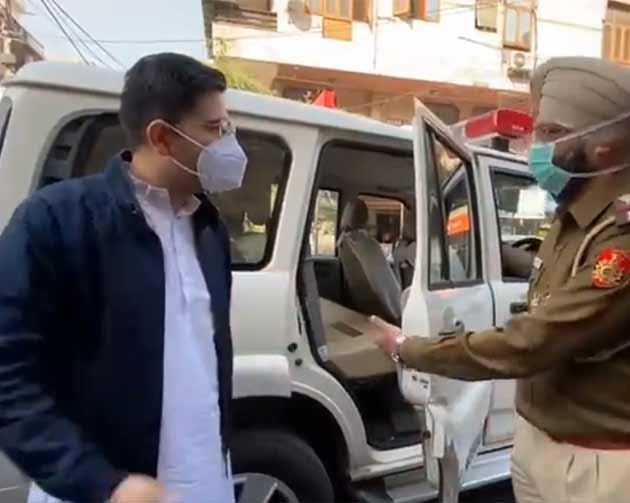 Sunday, 13 December 2020 (14:07 IST)
New Delhi: Senior Aam Aadmi Party leader and Rajinder Nagar MLA Raghav Chadha on Sunday was detained by Delhi Police ahead of his protest outside Home Minister Amit Shah’s residence, which was related to the alleged misappropriation of funds by the NDMC.

“We’re elected representatives of the Delhi government, and we were not allowed to meet with either the LG or the Home Minister. We were not even allowed to stage a peaceful protest outside their homes. Is this what happens in a democracy? The right to peaceful protest is every citizen’s constitutional right. I was only exercising the right that is guaranteed to me by my Constitution,” Shri Chadha said.

Shri Chadha also said, “This is perhaps one of the biggest scams that Delhi would’ve seen thus far, for the level of corruption is greater than what happened during the Commonwealth Games. The BJP-ruled MCD’s alleged scam runs to the tune of INR 2,500 Crore. This is public money, it is taxpayers’ money. This money could have been used to pay the salaries of sanitation workers, of nurses, of doctors -- of every frontline worker who has not been paid their rightful earning.”

The Aam Aadmi Party leader’s request to protest outside the Home Minister’s residence was denied by the Delhi Police. “From the way the BJP government is refusing to even engage with us, it is clear that they’re trying to save big people. Who are these people? Why is the BJP trying to save them,” said Shri Chadha.

On being detained by the Delhi Police, the senior party leader said, “If a protest by members of the Bharatiya Janata Party can be allowed outside a democratically elected Chief Minister’s house, why can’t the same right be extended to us?”

He also said, “MCD’s level of corruption is clear as day, and can be gauged from the fact the BJP itself keeps changing its councillor’s tickets on charges of corruption. It is for everyone to see how the BJP gives repeated chances to its own councillors.”

Shri Chadha said, “Despite the BJP-ruled MCD’s massive corruption, members of the BJP have been camping outside the CM’s residence, demanding money to indulge in further corruption. I want to ask the citizens of Delhi, should this be allowed? Should the BJP-ruled MCD get even more money to continue with unabated corruption?”

We will never forget cowardly attack on Parliament in 2001: PM Modi

Pregnant deer dies after being hit by unidentified vehicle