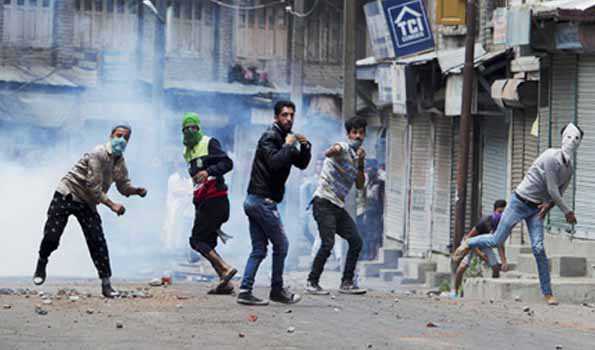 Tuesday, 25 May 2021 (22:18 IST)
Srinagar:Asserting that action against militants and their associates should continue, J&K Director General of Police (DGP) Dilbag Singh said all the suspicious elements should be kept under check to foil their ill designs aimed at disrupting normal lives of the people.
Mr Singh said this while chairing a high-level review meeting at Police headquarters to take stock of the security situation and also review J&K police's response to second wave of COVID-19.
The DGP while speaking on the occasion directed the officers to augment the security grids to further improve safe and secure environment for the citizens. 'The action against the militants and their associates should continue and all the suspicious elements should be kept under check so as to foil their ill designs aimed at disrupting normal lives of the people,' he said.
Underscoring the need for pro-active role of the law enforcing agencies, the DGP directed police officers to put in place effective measures for maintaining peace and order in coordination other security forces.
Mr Singh said that JKP along with other security forces have ensured rule of law after facing tough challenges and have succeeded to maintaining sense of security among the people. He said that 'our efforts will continue to strengthen the peace in J&K'.
The DGP stressed on the need of using all the technology and related tools to keep a check on the people who are misusing the social media. He directed that a mechanism must be put in place to identify and bring to book all the mischief mongers, who are found using the social media for anti-national and anti-social activities.
He directed the field officers to take effective steps against the drug peddlers so that the menace of drug abuse is eradicated.
The DGP directed the officers to maintain close surveillance of such elements trying to disrupt the fast returning peaceful atmosphere and take all measures to neutralise such attempts.
The DGP while reviewing the J&K Police response to second wave of COVID-19 stressed for implementing the government directives, advisories, besides assisting the administration to contain the spread of COVID-19. He said that 'we are in the critical phase and every possible effort is required to come out of it.'
The senior officers briefed the DGP about the measures put in place for maintaining peace and order and ensuring security of the people. The DGP was also apprised regarding J&K Police's different measure in response to the COVID-19.(UNI)

“White fungus could be deadly in Covid-19 patients”