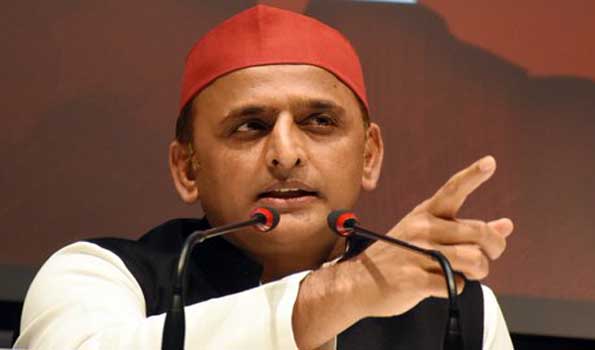 Wednesday, 23 June 2021 (23:42 IST)
Lucknow: Samajwadi Party president Akhilesh Yadav has said his party will win 350 seats in 2022 UP assembly elections and form the next government.

Having burnt the fingers in 2017 UP assembly polls and 2019 Lok Sabha elections by forging alliance with the Congress and Bahujan Samaj party respectively, Akhilesh Yadav ruled out any tie-up for the Uttar Pradesh election next year and said his party would join forces with like-minded smaller parties. "Those who want to defeat the BJP, I appeal to them to help the Samajwadi Party", he added.


"My experience with big parties is not good, I will not get into any alliance with them," Akhilesh Yadav told a TV channel here on Wednesday.

Ruling out a “Bua-Bhatija” repeat act after his 2019 alliance with Mayawati's Bahujan Samaj Party (BSP) flopped, Yadav admitted that a few BSP leaders were in touch with him.

On the Congress, he said the party was too weak in UP to beat the BJP. "We did not have a good experience with them in 2017 - we gave them over 100 seats but they could not win. The people of UP have rejected the Congress," said Yadav, sidestepping a question on Priyanka Gandhi Vadra's mission to rebuild the Congress in the state.

He said the Samajwadi Party was targeting 350 of UP's 403 seats in the crucial election that is widely seen as a test of voters' pulse ahead of the 2024 national election, when Prime Minister Narendra Modi's BJP will seek re-election and a third straight term in power.

"The BJP is going to lose the upcoming UP elections... they failed the people of UP in the biggest test of their leadership. People were abandoned by the government. The so-called double-engine government - at the Centre and in UP - is going in different directions."

Targeting the Yogi Adityanath government's handling of the Covid crisis in the state, especially in the second surge, Yadav accused the government of hiding the true figures of deaths. The Samajwadi chief also sought to explain a controversial remark that he made on "not taking the BJP vaccine", a reference to Bharat Biotech's Covaxin that was cleared for use while still in clinical trials.

“I had only refused to take the vaccine initially because it had not completed all the trials,” Yadav said to allegations that his comments added to vaccine hesitancy in UP. On when he planned to take the shot, he kept it open-ended and said: "I have told the UP government that if it is able to vaccinate all the poor free of cost by Diwali, I will take the vaccine." He dismissed the risks involved in delaying vaccination.

“I had Covid in April and scientifically, am safe for three months at least,” he said, asserting that his father and former Chief Minister Mulayam Singh Yadav had been vaccinated. (UNI)

UP eases COVID restrictions; Malls, restaurants to open with 50 % capacity