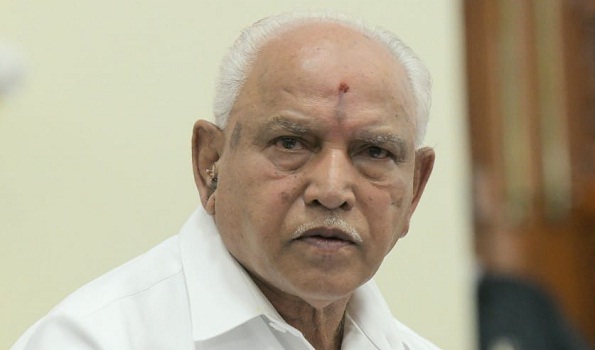 "There is no confusion. Naddaji is our national party president. It is our duty to abide by his direction. As far as his comments on my good work is concerned, it has nothing to do with the issue. Let us wait and watch till tomorrow morning. Thereafter I will decide," he told reporters.

Earlier, Nadda had denied any "political crisis" in the party and appreciated Yediyurappa's work. "It's good. He has done a good work and Karnataka is being run well and Yediyurappa is doing his work according to his way," Nadda told reporters in Panaji, Goa.

Replying to a related query on "political crisis" in the party, he said, "So do you think, but we don't think so."

Soon after returning to Bengaluru, Yediyurappa said he has not yet received any message from the central leadership and he would go ahead with his scheduled programme pertaining to completion of two years of his rule in the state tomorrow.

"Tomorrow I have an event on the completion of two years of our rule. I will speak about the achievements of our government on this occasion. Till the end, I have decided to work for the party. I am ready to quit if I am asked to do so. This I have said two months ago. And even now I am telling you. Till now, no message has come from the centre. If they ask me to quit, I will quit and work for the party," he added.

Asked who had fixed July 25 as the date for the message, Yediyurappa said he would not like to speak about it. and believed it will be known tonight or by tomorrow morning.

Replying to a query, he said he would decide on visiting rain-hit Karwar district.

On July 17, Yediyurappa had dismissed rumours about his resignation, saying not a word was discussed on the topic when he met the central leadership. On the contrary, he said Nadda had asked him to strengthen the party ahead of the 2023 state assembly elections.

After maintaining silence over media speculations, on July 22, Yediyurappa, broke his silence for the first time by saying he would abide by the central leadership's decision if he is asked to quit the chief minister's post.

In Belagavi, he denied a major blow to the party's prospects, if he is asked to step down.

"Nothing will happen. Our party has many senior leaders. Whatever the central leadership decides, we will obey it and all work hard together. We have one goal, and that is to work together and lead BJP to victory (in the next election)."

Yediyurappa had started his political career as Purasabha president in Shikaripura and was first elected to the Legislative Assembly from Shikaripura in 1983. He won eight elections from here. (UNI)