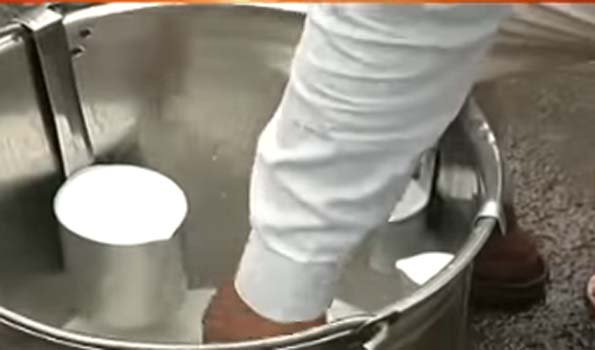 Saturday, 29 May 2021 (22:32 IST)
The famous dairy company Amul and animal welfare NGO PETA(People for the Ethenic treatment of Animals) were loggerheads on Saturday.
The matter escalated when the later advised the former to resort to selling soya-based milk in order to prevent any type of cruelty to the cow or the calf. Amul, Gujarat Co-operative Milk Marketing Federation Ltd., reacted sharply to this demand on social Media.
on 26th May, reacting to a tweet by a Delhi university professor, PETA tweeted" Indian farmers stand to greatly benefit from vegan (which simply means made from plants) foods.
Instead of fighting inevitable vegan national/global trend, Amul corporation can start making plant-milk itself like so many dairy & former dairy companies now do."
The Managing Director R S Sodhireacted sharply to this on Twitter. He took to the microblogging site and tweeted his reply. "Will they give livelihood to 100 million dairy farmers (70% landless) , who will pay for children school fee .. how many can afford expensive lab manufactured factory food made out of chemicals ... And synthetic vitamins.
In another tweet, he wrote" Peta wants Amul to snatch livelihood of 100 mill poor farmers and handover it's all resources built in 75 years with farmers money to market genetically modified Soya of rich MNC at exhorbitant prices,which average lower middle class can't afford.
Later the Amul company also tweeted from its official Twitter on this matter. "Amul’s stand on milk has been vindicated. The Advertising Standards Council of India (ASCI) has dismissed three complaints filed by animal rights organizations — Beauty Without Cruelty (BWC), People for Ethical Treatment of Animals (PETA) and Sharan India against Amul.".Maximum of the Twitteratis were seen tweeting in the support of the dairy company.(WD)