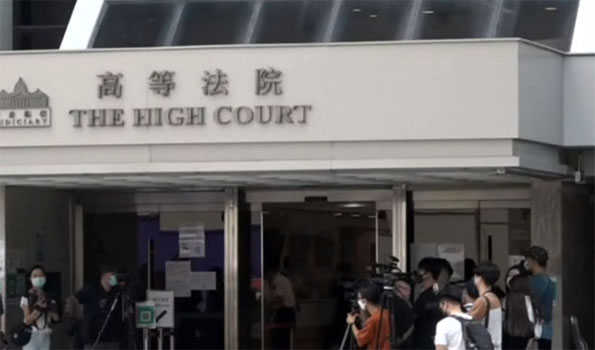 Former waiter Tong Ying-kit, 24, stood accused of driving his motorcycle into police on July 1 of last year, the day after the national security law was imposed on Hong Kong by Beijing.

He carried a protest flag with the popular slogan of the 2019 protest movement against China's increased authoritarian influence in the city which read, "Liberate Hong Kong, revolution of our times."


He faces a possible prison term of seven years to life.

An alternative charge of dangerous driving, which would have carried only seven years, was not considered.

Rather than a jury, which would be custom in Hong Kong's common law system, Tong's case was heard by three judges chosen by Carrie Lam, the Beijing-backed Hong Kong chief executive. This is possible because cases that are deemed to involve state secrets are subject to special rules.

More than 60 people have been charged under the draconian national security law. Many of them are awaiting trial in jail.

The verdict is being closely watched as a harbinger of how future national security law cases will be tried.

A focus on the revolution flag at trial

Tong's defense lawyer argued that it was impossible to prove his client had incited secession by carrying a flag with the slogan Beijing finds offensive.

The defense posited it was also not possible to prove Tong's bike crashed into police deliberately. Further, Tong's lawyers said his actions should not be classified as terrorist acts because of the absence of violence or societal harm.

During the 15-day trial, great time was spent dissecting the flag Tong had, with prosecutors and the defense calling up university professors to interpret the meaning and nuance of the slogan.

While prosecutors argued Tong had pursued a "political agenda" with deleterious consequences for society, the defense's experts told the court the slogan had various meanings in a leaderless movement where a plethora of political views were represented.

"It is actually quite difficult, quite traumatic or even misleading to think that one idea only means one thing in my mind in all circumstances," Francis Lee, the head of the Chinese University of Hong Kong's journalism school and expert witness for the defense, told AFP.

Cutting the oxygen to democracy in Hong Kong

While Beijing expects Hong Kong to play by its rules now, Beijing is also rewriting its rules after having reneged on its commitment to permit Hong Kong to maintain its own system for 50 years after the British handover in 1997.

China's rubber stamp legislature ordered changes to the composition of Hong Kong's Legislative Council to have a pro-Beijing majority comprised of those it calls "patriots."

In addition to banning the slogan on Tong's flag, "Liberate Hong Kong, revolution of our times,'' library books and educational materials have been investigated for alleged secessionist mantras and meanings.

The last pro-democracy paper Apple Daily was squeezed financially, and its newsroom raided last month before four editors and journalists were arrested on charges of harming national security.

Jimmy Lai, the paper's owner, was already charged under the national security law.

For its part, despite criticism Beijing insists it is merely restoring order to Hong Kong and its institutions.

Tokyo Olympics: Satwik-Chirag fail to make the quarters despite win against Great Britain