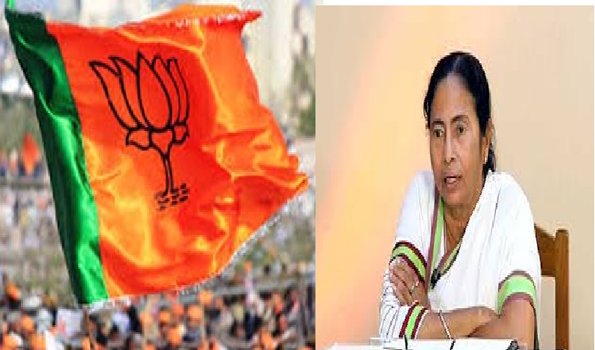 Tuesday, 2 March 2021 (21:32 IST)
Hooghly:Trinamool Congress (TMC) MLA and former Asansol mayor Jitendra
Tiwari on Tuesday joined the Bharatiya Janata Party (BJP) in the presence of party’s state
president Dilip Ghosh.
He was inducted into the party at a public meeting at Baidyabati in this district.Mr Tiwari becomes the latest entrant among several TMC leaders and MLAs who have defected to the saffron party ahead of the Assembly elections.

He had stepped down from the post of chairman of the administrative board of the Asansol Municipal Corporation and quit TMC as well two months ago. However, after objections from Union minister Babul Supriyo, party leader Locket Chatterjee and others, Mr Tiwari was not inducted into the party despite him being keen. Mr Tiwari was removed as the party’s West Burdwan district president for his action and subsequently made the party’s national spokesperson — a move that did not go down well with him.
After joining the BJP, Mr Tiwari said, “I thank the BJP for including me in their big family.I don’t want to make any allegations against anyone. But it is a fact that I could not 'express my views and opinions in my former party. Now I will be able to speak freely.Today, I got the opportunity to chant Jai Shri Ram from a public meeting,”.
Reacting to the latest development, TMC secretary general and State Education Minister Partha Chatterjee said, “A lot of leaders are leaving. What’s so special about it? At the same time, a lot of leaders from the BJP are joining the TMC. Mamata Banerjee is the face of TMC and she is the only leader we are following. Those who are leaving will get nothing in return.”
(UNI)